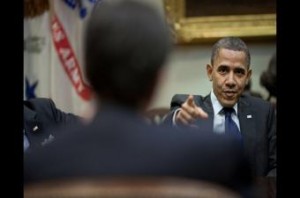 President Barack Obama met with financial regulators this week to commend them for progress made since the Dodd-Frank Act became law in 2010, the White House announced.

According to the White House, the president praised the regulators for "efforts to further strengthen the financial system by continuing to implement the Wall Street Reform and Consumer Protection Act, which includes the most sweeping set of financial regulatory reforms since the Great Depression and the strongest consumer protections in history that have afforded millions of hard-working Americans new rights and protections within the financial sector."

The president exhorted the regulators and participants in the meeting to "consider additional ways to prevent excessive risk-taking across the financial system," according to the White House. Participants discussed the importance of mitigating risks to the financial system and identifying and addressing gaps in oversight or areas of overlap by continued coordination through the Financial Stability Oversight Council, of which many of the meeting's participants are members.

While the president was complimentary of the progress the regulators have made toward Wall Street reform in the last four years, not every government official was convinced.

"Dodd-Frank is every bit as far-reaching in its harmful consequences for struggling Americans as Obamacare," House Financial Services Committee Chairman Jeb Hensarling (R-Texas) said on Monday in statement responding to the meeting. "Thanks to Dodd-Frank, it is harder for low-and moderate-income Americans to buy a home and there are fewer community banks serving the needs of families and small businesses."