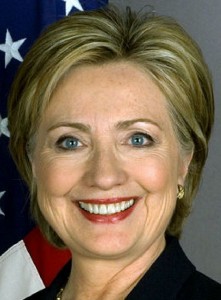 Democrats have repeatedly vowed to fight any attempts by Republicans to roll back the Dodd-Frank Wall Street Reform and Consumer Protection Act of 2010. Now, one of them is taking it one step further.

In an editorial in the New York Times on Monday, former Secretary of State and current Democratic presidential hopeful Hillary Clinton, said that as president she would “go well beyond Dodd-Frank” by vetoing any attempt to weaken financial reform and fighting for “tough new rules, stronger enforcement, and more accountability.”

“I would also ensure that the federal government has—and is prepared to use—the authority and tools necessary to reorganize, downsize and ultimately break up any financial institution that is too large and risky to be managed effectively,” Clinton wrote. “No bank or financial firm should be too big to manage.”

Clinton said she also plans to strengthen the Volcker Rule, a key provision of Dodd-Frank, by closing loopholes that allow banks to speculate using deposits backed by taxpayers.

The plan also includes the whole financial sector and not just banks, Clinton said, since many of the firms such as AIG and Lehman Brothers that contributed to the financial crisis in 2008 were not traditional banks. Clinton said she plans to strengthen oversight of activities of hedge funds, investment banks, and other non-bank financial institutions by imposing strict margin requirements on the kind of borrowing that led to the crisis.

“No bank or financial firm should be too big to manage.”

Clinton also plans to hold executives more accountable, because no one is “too big to jail.” She said as president she will seek to extend the statute of limitations for major financial crimes from five to 10 years and up the ante by increasing whistle-blower rewards. She also plans to make financial firms admit wrongdoing as part of settlements in addition to the fines they pay to the government—and ensure that those fines cut into the executives’ bonuses.

“The proper role of Wall Street is to help Main Street grow and prosper,” Clinton said. “When our financial sector works the right way, it helps families buy their first homes, entrepreneurs start and grow small businesses and hardworking Americans save for retirement. Rather than pursuing the kind of high-stakes speculation that devastated our economy before, Wall Street should focus on building an economy that creates good-paying jobs, rising incomes and sound investments so that more families can achieve the security of a middle-class life.”