Home >> Daily Dose >> Don’t Get Lost in the Margins

Don’t Get Lost in the Margins 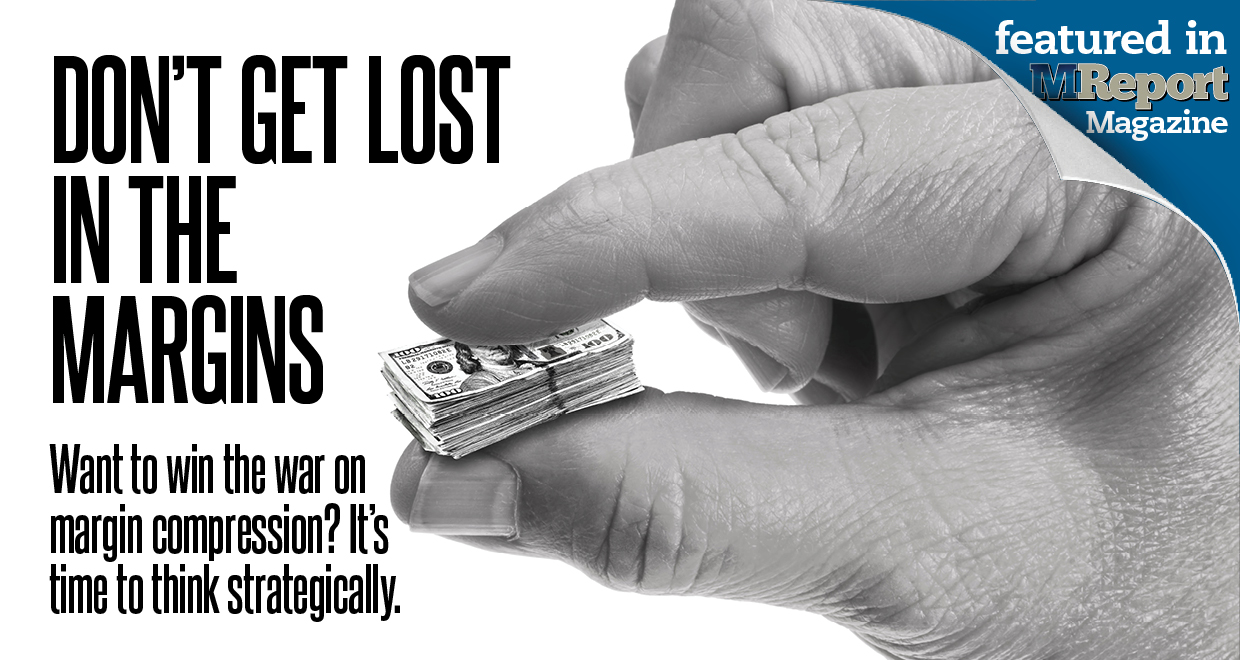 This piece originally appeared in the February 2022 edition of MReport magazine, online now.

There is no way around it, margin compression continues to be a top concern for lenders industrywide. In the latest Fannie Mae Mortgage Lender Sentiment Survey, 46% of lenders claimed they are expecting lower profit margins throughout Q4 2021. As declining profitability remains a recurring concern, suggestions on how to combat margin compression have continued to rise across the mortgage industry, with reducing operating costs being the most popular.

In addition to the expectation of declining profitability this quarter, the most commonly named driver of a projected lower profit margin is competition from other lenders, and the percentage citing it reached a new survey high. With 80% of lenders expecting fierce competition to be a key reason for decreased profits, any strategy an organization looks to employ to combat shrinking margins must also help address the tightening market for new business. Thus, the question becomes: How can today’s leading mortgage lenders be sure they aren’t winning the battle for market share, only to lose the war against margin compression?

For lenders concerned with margin compression and decreasing profitability, the allure of trimming operational costs is easy to understand, as less overhead equals more profits. Unfortunately, this near-sighted approach simply puts the lender on a never-ending rollercoaster of increasing costs when volumes are high only to be forced to then cut them during the inevitable downswing. Not only does this strategy perpetuate the oft-maligned “hire and fire” cycle, but it also places lenders’ reputations at risk as operational cuts that go too deep can often negatively impact service levels. Rather than slashing operational costs, the best way lenders can combat margin compression is to work within their margins to ensure they offer the best rates while remaining profitable. Lenders can use real-time rate intel and pricing insights to make strategic pricing decisions, gain a competitive advantage and positively impact profit margins. With tactical and granular pricing, lenders can adjust rates on a market-by-market basis and capitalize on margin opportunities. The data leveraged for strategic pricing models also allows lenders to clearly communicate their overall strategy to the sales and operations teams, facilitating transparency across the organization, building trust, and demonstrating clear goals with data-based certainty.

Many lenders determine pricing based solely on internal data and needs, “strategically,” setting a regional or nationwide price that supposedly ensures maximum profitability. True strategic pricing, however, considers both internal and external data when setting prices for metropolitan statistical areas (MSAs), allowing lenders to capitalize on each and every basis point up for grabs.

This unrivaled level of hyper-transparency and pricing at the MSA level powers a superior, truly aggressive pricing strategy that prioritizes margins and a competitive edge from the very beginning. It provides lenders with a granular look at their own pricing and margins strategies, as well as the pricing and positioning of their competitors. Sometimes that may mean a lower profit margin in one MSA, but a stronger presence in the market and in turn, greater volume.

Another scenario would find the lender focused on an MSA where they are able to raise rates and/or pricing to gain margin without sacrificing volume. The ability to identify and take advantage of highly sensitive or insensitive markets and segments is crucial to lead generation, profit margin, and overall performance, ultimately tipping the scale up and to the right.

True strategic pricing and competitive intel give lenders the advantage of a two-pronged attack on margin compression. By working within their margins, mortgage lenders can increase profitability and improve competitiveness without making significant changes to operations, thus winning the battle for market share and finding themselves victorious in the war for profitability.