In 2009, Federal Reserve Chairman Ben Bernake told colleagues he was “uncomfortable” providing extra aid to Bank of America, according to Federal transcripts released Wednesday. The transcripts, released five years after the fact, include discussions regarding interest rates, bank bailouts, and the economy held between then Federal governors and regional presidents. Access to these conversation help shed light on decisions policy makers struggled with during the financial crisis. 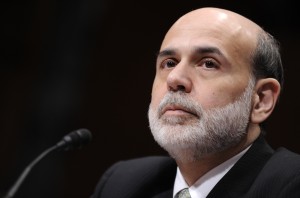 “We were a little disappointed in Bank of America’s monitoring in that they seemed a bit behind the curve in terms of following the developments at Merrill Lynch,” Bernanke said at the Federal Open Market Committee that morning, according to the transcript. “But there were enormous losses at Merrill Lynch that emerged very quickly and that surprised Bank of America and us as well.”

At the January meeting, Bernanke said Bank of America’s initial deal to buy Merrill was a “freely negotiated agreement” between the two banks.

“There was no government assistance, and there was no request for government assistance,” he said. “It was a commercial decision. At that time, we were actually quite happy to see it happen because we were concerned about the pressures on Merrill. But it was their decision, and we had no particular reason to think that there would be extraordinary losses in this case.”

The bailout for Bank of America also included an agreement to protect the bank from losses on a pool of bad loans and securities, modeled after a similar arrangement for Citigroup. Bank of America had already received $25 billion from the government as part of a 2008 Treasury plan before receiving the $20 million in 2009.

“I know President Lacker was uncomfortable with this arrangement,” Bernanke said. “I am certainly very uncomfortable with it. But for whatever reason, our system is not working the way it should in order to address the crisis in a quick and timely way. Until the reinforcements arrive, I don’t think we have much choice but to try to work with other parts of the government to prevent a financial meltdown.”

Bank of America had paid back all of its bailout money by the end of 2009 and canceled the loss-protection agreement, which was never finalized. Bank of America CEO Ken Lewis retired at the end of the year and was replaced by Brian Moynihan, who took steps to sell off assets and simplify the bank. In September 2012, Bank of America agreed to pay $2.43 billion to settle claims that it misled investors about the Merrill Lynch deal.