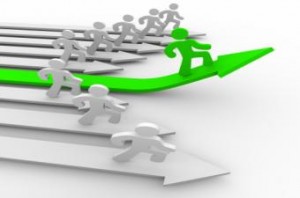 The decline in mortgage production in the year's opening months failed to produce any names to the list of top lenders for the quarter, but it did shake up the rankings a bit.

According to data collected and released Monday by Mortgage Daily, first-quarter origination dollar volume came to an estimated $252 billion, a 25 percent drop from the prior quarter and the third straight quarterly decline.

As already seen in their earnings reports for Q1, many of the nation's top lenders have taken losses on the mortgage banking side as a result of the downward trend, which itself could be blamed on falling demand and restrictive loan standards.

Staying firmly in the No. 1 spot for the quarter was Wells Fargo, which held on to 14.3 percent of the market with $36 billion in origination volumes, down from $50 billion in Q4 2013.

JPMorgan Chase followed, staying in the second-rank spot with $18 billion.

While the rest of the pack remained the same from the previous period, their order has been shuffled: Tying for third place were Quicken Loans and Bank of America, each producing about $11 billion in loans, while U.S. Bank slipped to fifth place with $9 billion.

Missing from the latest quarterly list were a number of smaller firms who refused to report data, "all which reported ... when times were good," according to Mortgage Daily.

Just like in Q4, Stonegate Mortgage was the only company to report a quarterly improvement in production, reflecting its acquisitions of Crossline Capital, Medallion Mortgage, and Nationstar's wholesale business.

On the servicing side, Wells Fargo again beat out all others, boasting a portfolio estimated at $1.81 trillion.

Chase and BofA followed with portfolios of $970 billion and $780 billion, respectively.

Ranking fourth and fifth were non-bank servicers Ocwen ($392 billion) and Nationstar ($384 billion), who have each seen their growth stymied by heightened scrutiny from New York's superintendent of financial services, Benjamin Lawsky. Both companies have pledged to work with Lawsky's office to dispel allegations of mistreating customers and ease concerns of their quick growth over the last year.