Home >> Daily Dose >> Housing Supply Not Keeping Up with Demand

Housing Supply Not Keeping Up with Demand

Housing construction is still considerably below demand across swaths of the United States, and it’s causing costs and rents to balloon, according to a recent analysis.

On Tuesday, the Urban Institute reported that 2015 saw only 620,000 new housing units, reflecting a shortage of slightly more than 430,000 units nationwide.

As a result, the organization said, home prices and rents are going up despite historically low mortgage-interest rates and a steady economic recovery that continues to drive millennial homebuyers.

“The United States entered the 2008 economic crisis with more housing than was needed, putting downward pressure on price,” Laurie Goodman, co-director of the Urban Institute’s Housing Finance Policy Center, wrote in a blog post. “But construction hasn’t kept up since then, and that surplus has been substantially eliminated.”

To arrive at these numbers, the Urban Institute did the math on single-family, multifamily, and manufactured housing last year. Single-family and multifamily construction accounted for much of the construction.

By that analysis, starts and completions for recent single-family residential homes are below averages observed in decades before the Great Recession. 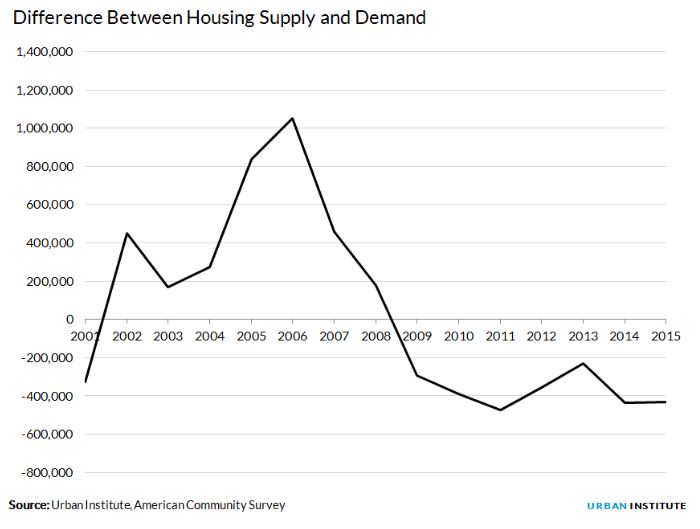 The organization also based the dearth of housing stock on the rapid climb in U.S. household formation, which it predicts is somewhere between 1 million and 1.1 million new households.

Some of this isn’t news. This month the Commerce Department reported that housing starts declined by 0.3 percent from the past month.

Goodman offered her own thoughts on what could be done to boost housing construction in areas that need it.

“The lack of affordable stock is already at crisis levels,” she said. “We need federal, state, and local strategies to boost construction in undersupplied areas, provide better affordability for renters, and extend mortgage credit to would-be first-time buyers.”