U.S. house prices rose in again April, continuing their steady four-year climb and still soaring past where they were at their pre-recession peak, according to the latest House Price Index (HPI) report from the Federal Housing Finance Agency (FHFA).

Andrew Leventis, supervisory economist at the FHFA, said that although the price increase in April was relatively modest, “the 12-month increase of almost 6 percent is consistent with the extraordinarily high appreciation we’ve been observing for several years now. Barring dramatic increases in wage growth and vast improvements in other market factors, most economists expect price growth to decelerate to more normal rates of appreciation in the future.” 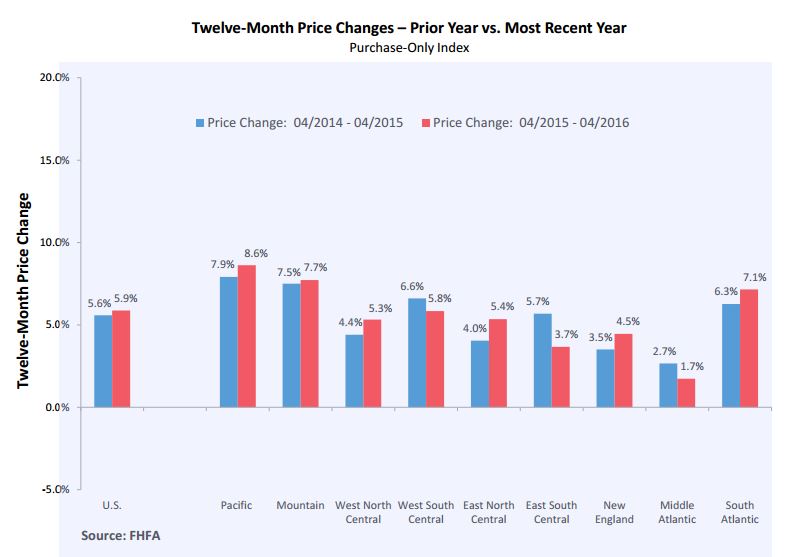 The extraordinarily high appreciation over the past several years refers to the unwavering climb in house prices since the spring of 2012. A year earlier, the index hit its nadir and then spent the following 12 months stutter-starting. But since early 2012, the index has been all uphill. Last November, the HPI surpassed its March 2007 perch.

In regional markets, the Mountain region‒‒Montana, Idaho, Wyoming, Nevada, Utah, Colorado, Arizona, and New Mexico‒‒had the highest HPI over the last 18 months, at 299.2, and the Pacific region grew the most over the past year, at 8.6 percent. From April to May, the New England region climbed 1.4 percent.

The only drop was in the Middle Atlantic‒‒New York, New Jersey, Pennsylvania‒‒but that was only month-over-month. The Middle Atlantic finished April 1.7 percent higher than it did last April.

Previous: Will Housing Policy Determine the Next President?
Next: Legal League 100 Turns Attention Toward Advocacy