During that same time frame, the number of loan originations to purchase a single-family home dropped from 7.4 million to 3.2 million, yet the denial-rate for home-purchase loan applications has improved greatly, dropping from 18.7 percent denial in 2007 to 13.2 percent in 2014.

These statistics come from CoreLogic’s June MarketPulse report, as does a reminder that credit availability these days is still relatively tight, even if standards are loosening. At the same time, credit scores for applicants are much higher than even five years ago. According to CoreLogic, the average credit score of borrowers has increased from roughly 690 in 2001 to almost 750 in 2015, which could explain why, given still-tight standards, loan applications are on the rise and denial rates are down.

The greater truth, then, according to Pradhan, could be that riskier applicants simply haven’t tried for credit the way they did in the barnstorming pre-recession years.

“Consumers are cautious more than they have been in the past and thus self-sidelining of cautious/discouraged consumers makes it appear as if credit is tightening,” she wrote. “The decline in originations could, therefore, be a result of potential applicants being either too cautious or discouraged from applying, more so than tight underwriting as the culprit in lower. 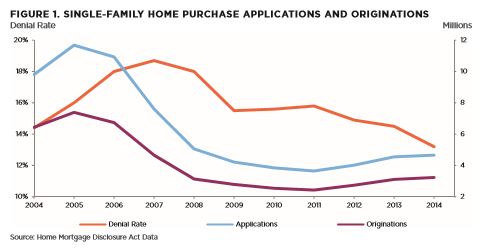