Bottom-tier housing prices are escalating at rates competitive with top-tier properties, and in some cases surpassing them greatly, according to according to the May Zillow Real Estate Market Reports, released Friday.

Nationally, the bottom third of the market is seeing fewer price cuts on listed homes and faster growing home values than more expensive homes. May’s numbers showed that while top-tier prices have cooled to a steady 4 percent growth, bottom-tier prices were up 8 percent in May.

In some markets, the gulf between those rate-increase percentages in May was notably larger. The Dallas-Fort Worth market had the largest gains in bottom-tier growth (21.6 percent) in a market that saw 9.5 percent growth in top-tier prices and a 12.5 percent appreciation in middle-tier prices. D-FW’s average home value of $187,900 is also close to the U.S. average of $186,100, according to Zillow. 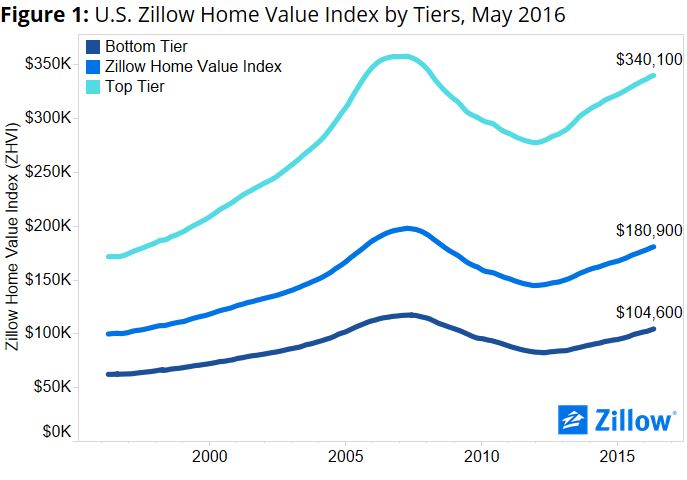 In most markets, bottom-tier growth in May was higher than top-tier growth, though a few metros, such as Boston, Virginia Beach, Baltimore, and Seattle, saw nearly identical growth at both ends. New York/Northern New Jersey saw higher top-tier growth than bottom-tier, posting 5.1 percent and 3 percent rates, respectively.

For buyers, according to Svenja Gudell, Zillow’s chief economist, the demand for lower-tier houses could create a lot of bidding wars, and Zillow has, correspondingly, seen buyers turn toward higher-end properties, where growth rates availability have stabilized.

“The number of homes for sale at the top of the market has remained flat over the past year, while inventory in the bottom-third is down almost 9 percent,” Gudell said. “Some markets are worse than others‒‒in Portland, there are almost 40 percent fewer entry-level homes for sale than a year ago.”