Mortgage rates are still very low in general. But not all mortgages have those rates in the mid-3s.

In fact, according to Molly Boesel, senior economist at CoreLogic, about 38 percent of active loans and 28 percent of unpaid principal balances (UPBs), as of February, carried mortgage interest rates higher than 4.50 percent. This, teamed with the expected rise in rates, has Boesel wondering in the latest CoreLogic MarketPulse report [1] what will happen with refinancing as the year ticks on.

“Because a refinance isn’t free, a simple rule of thumb is to add 100 basis points to the current market mortgage rate as the rate at which borrowers would have an incentive to refinance,” she wrote.

Following that math, Freddie Mac’s May near-historic low average of 3.57 percent on 30-year mortgages rate means that the typical borrower “would need to hold a mortgage rate of 4.57 percent or higher to make refinancing a money-saving option,” she wrote.

Boesel also calculated that if mortgage rates were to increase by 50 basis points this year, those borrowers in the 4.50-and-higher range‒‒about 5.5 million borrowers‒‒would generally find refinancing unappealing.

“If mortgage rates rise as predicted, we will certainly see refinancing volumes fall in 2016,” Boesel wrote.

On the upside, a drop in refinancing does not automatically mean that borrowers would never take out new loans.

“Even though at least 62 percent of borrowers most likely don’t want to refinance out of their low mortgage rates,” Boesel wrote, “they still might want to tap into their equity to pay for remodeling, education expenses, or debt consolidation.”

In other words, instead of cashing out to refinance, homeowners turn to more straightforward home equity loans. According to a February 2016 white paper by CoreLogic, [2] in recent years, home equity loans have been making a comeback. 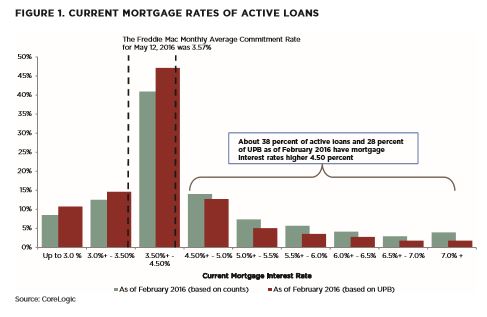