Single-family house prices in May were up from April and from a year ago, and should steadily rise through next spring, according to the latest CoreLogic Home Price Insights Report and HPI Forecast from CoreLogic released Tuesday.

Prices nationwide, including distressed sales, increased 1.3 percent from April and by 5.9 percent compared with May 2015. The overall index is essentially where it’s been since May of 2014, when prices leveled out after a six-year rollercoaster.

“Housing remained an oasis of stability in May with home prices rising year over year between 5 percent and 6 percent for 22 consecutive months,” said Frank Nothaft, chief economist for CoreLogic. “The consistently solid growth in home prices has been driven by the highest resale activity in nine years and a still-tight housing inventory.”

Year-over-year, three states posted decreasing house prices: Connecticut, with a 0.9 percent drop, New Jersey, with a 0.2 percent drop, and Pennsylvania, with a 0.1 percent drop. Most states, particularly in the Midwest, saw modest growth in the 3-to-5 percent range; prices in the Southwest, from Texas to Utah, generally saw higher increased, over 7 percent. 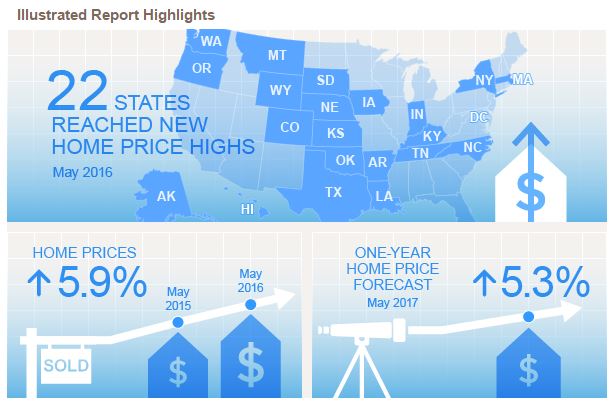 CoreLogic on Tuesday also predicted that home prices will increase 0.8 percent for June and, year-over-year, 5.3 percent by May 2017.

“Price appreciation continues to be fairly broad-based across the U.S. From a regional perspective, the Pacific Northwest continues to be the hottest area for home-price growth, with Oregon and Washington leading the way,” said Anand Nallathambi, president and CEO of CoreLogic. “The recent turbulence in financial markets should lead to modestly lower mortgage rates, which will provide even more support to the steadily improving real estate recovery.”