Borrowers in owner-occupied homes are sitting on trillions worth of accessible home equity by today’s lending standards—but not all of the country's housing wealth is equally distributed, according to a new report from the Urban Institute’s Housing Finance Policy Center.

Authors Laurie Goodman and Wei Li of the Urban Institute’s HFPC point out that about 64 percent of the $11 trillion, or about $7 trillion, in net housing wealth in owner-occupied homes nationwide is accessible under the standard which most lenders today use, which is allowing homeowners to borrow about 75 percent of their home’s value.

That $7 trillion in accessible wealth breaks down to about $150,500 for each homeowner on average spread out among the 52 million homeowners nationwide (out of about 73 million owner-occupied units) with accessible housing wealth. However, about half of those 52 million homeowners have some outstanding home debt and half have none; those with no outstanding home debt had about $229, 300 in home equity available to them while those who still owed money on their mortgages could access an average of about $104,900 in equity. 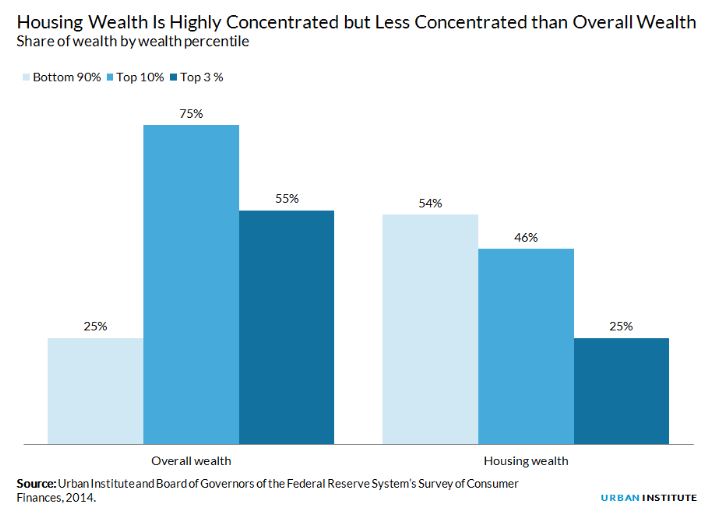 These numbers prompt several policy questions as to how much homeownership contributes to inequality, whether or not government policies that support homeownership exacerbate inequality, how wealth of lower-income borrowers can be better protected if house prices crash, and how to improve access to mortgage credit that allows for sustainable homeownership and enhances economic well-being.

“The numbers in today’s report provide a solid baseline against which to judge progress in addressing these issues,” Goodman and Li wrote.