Builders Battle Shortages But Brighter Days May be Ahead

The builder confidence level ticked down from 60 to 59 over-the-month in July. HMI’s three components are scored (builder perceptions of current single-family home sales, sales expectations for the next six months, and prospective buyer traffic) and then averaged; an index score over 50 indicates that more builders view conditions as good rather than poor.

“For the past six months, builder confidence has remained in a relatively narrow positive range that is consistent with the ongoing gradual housing recovery that is underway,” said NAHB Chairman Ed Brady, a home builder and developer from Bloomington, Illinois. “However, we are still hearing reports from our members of scattered softness in some markets, due largely to regulatory constraints and shortages of lots and labor.”

In July, all three components of the HMI dropped slightly from the previous month, with current sales expectations and buyer traffic each falling by one point down to 63 and 45, respectively. For sales expectations in the next six months, the index rating fell to 66, a decline of three points.

“The economic fundamentals are in place for continued slow, steady growth in the housing market.”

Considering the declines over the three components of the HMI, the three-month moving averages for regional HMI scores were fairly consistent. HMI scores in the Northeast (39), Midwest (57), and South (61) were unchanged, and in the West, the HMI score bumped up by one point up to 69.

That being said, improvements in home sales may be on the horizon, according to NAHB.

“The economic fundamentals are in place for continued slow, steady growth in the housing market,” NAHB Chief Economist Robert Dietz said. “Job creation is solid, mortgage rates are at historic lows and household formations are rising. These factors should help to bring more buyers into the market as the year progresses.” 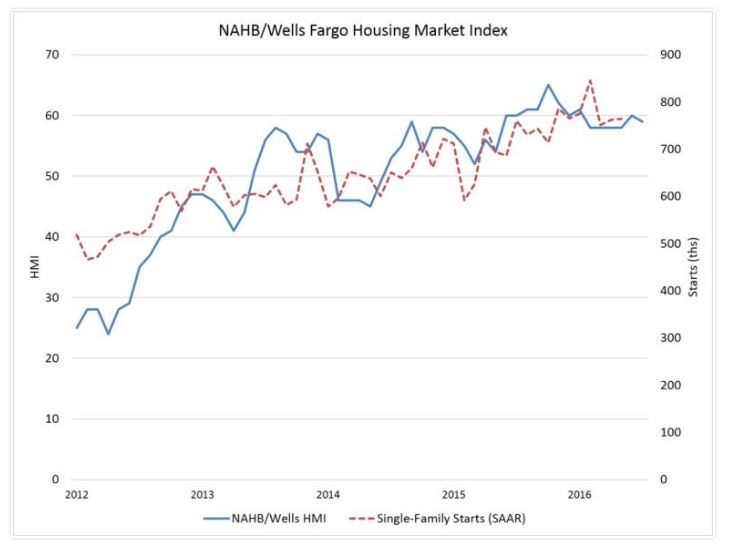 Previous: Bank of America: Mortgage Production Up, Profits Down
Next: Should Regulations Get Tougher for Wall Street?