Residential building activity was up across the board in June, with numbers for permits, starts, and completions above where they were in May, according to a joint report issued Tuesday by the U.S. Department of Housing and Urban Development (HUD) and the U.S. Census Bureau. However, the year-over-year numbers remain down for permits and starts, which is preventing housing supply from keeping up with demand.

Building permits for privately owned housing units in June were at a seasonally adjusted annual rate of 1.15 million, which was 1.5 percent higher than May's rate, but is 13.6 percent below June 2015. There were also 738,000 single-family authorizations in June, 1 percent above May.

Ralph McLaughlin, chief economist at Trulia, cited zoning issues as a probable cause for the lagging permit numbers.

“While restrictive zoning regulation is often named as public enemy number one, our latest research suggests delays in permit approval better explains why new supply is abundant in some areas and stingy in others,” he said. “This is because zoning can be changed, while uncertainty over project approval cannot.”

There were 1.19 million actual housing starts in June, nearly 5 percent above May, but still 2 percent below last June. The 778,000 single-family starts were 4.4 percent higher than May. 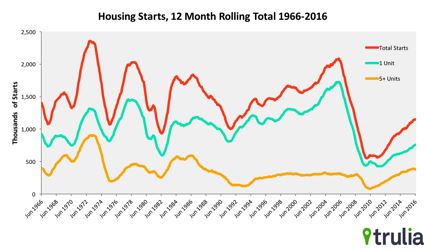 Trulia’s new report  on the same sectors backed up HUD/Census numbers, showing that despite month-to-month improvement, monthly starts are still about 20 percent below historical averages. According to Trulia, the 12-month rolling total of starts-which is a less volatile measure of new construction activity-grew 8.6 percent year-over-year in April to 1,150,000 starts, which is down from May’s jump of 11.8 percent.

Nationally, new housing supply relative to demand is about 15 percent below the historical average, McLaughlin said.

One thing to be mindful of is that multi-family growth is not as strong as single-family construction. According to realtor.com’s chief economist, Jonathan Smoke, construction of multi-family housing is slowing and “we are still not seeing the growth needed to address inventory challenges.”

HUD/Census reported that there were 384,000 permits authorized in June for buildings with five or more units. There were 392,000 starts and 386,000 completions.

“The June data points on new construction show little change from what we have already observed during the spring and summer, and continues to indicate that builders are starting what they already permitted earlier this year but are not being bullish about demand for this fall and winter,” Smoke said. “We are continuing to see that new construction is failing to keep up with household formation, so the low vacancies in rentals and the dearth of homes for sale will continue to provide a solid foundation for rising rents and home prices.”

Click here to view the complete report from HUD and the Census Bureau.