With the economy sending mixed signals, average mortgage interest rates—which have been hovering right above historic lows for weeks—may be a little confused on which way to go.

The average 30-year FRM remained near its historic low of 3.31 percent set in late 2012. Last year at this time, the average rate was 3.94 percent.

“It's not clear how the economy is performing, so mortgage rates don't know which way to go at the moment," said Keith Gumbinger, vice president of HSH.com. “A weak report covering second quarter Gross Domestic Product growth two weeks ago gave way to a very solid July employment report. The drag of one report is being offset by the push of the other.”

The average 15-year FRM bumped up by 2 basis points from 2.74 percent to 2.76 percent but is down over-the-year from 3.17 percent, according to Freddie Mac. 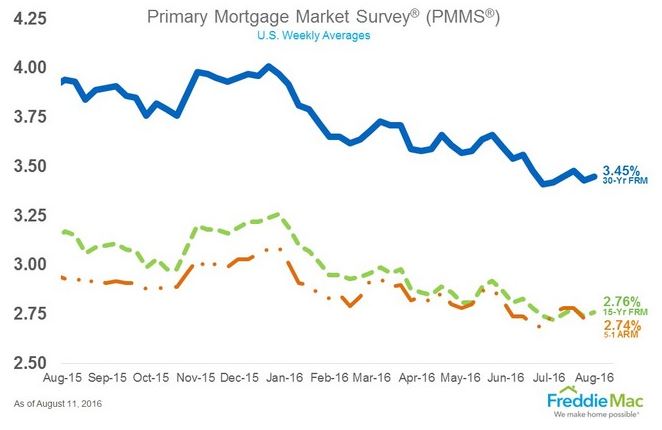 The Fed could raise the federal funds target rate as soon as September if the economy is accelerating; according to HSH, futures markets after the July jobs report estimate the chances of a September rate hike by the Fed at 18 percent. Prior to the report, futures markets reported the likelihood of liftoff for the Fed in September at 12 percent. One more employment summary (the August jobs report) will come out before the next Federal Open Market Committee meeting on September 20 and 21; if the news for that report is good, combined with July’s solid report, it may be enough to convince the Fed to raise rates.

“More data covering July and fresh August reports will come in the next few weeks; if solid, they could push mortgage rates a little higher as we go. With that said, we will remain far closer to the year's lows than highs, so opportunities for cheap home financing will continue to persist for a good while yet,” Gumbinger said.