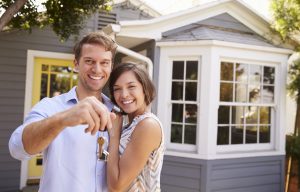 First-time homebuyers are still crushing the mortgage market when compared with repeat buyers, according to a recent report by the Urban Institute (UI). Despite facing inflated prices, stunted supply, tight credit, and rental costs that make saving for a down payment difficult, first-timers have commanded the mortgage market for the past 10 years, the report revealed and The Urban Institute doesn’t see that changing anytime soon.

Giving a brief background, the report indicated that theFederal Housing Administration (FHA), which makes low down payment loans available to borrowers with subpar credit, has typically targeted the first-time buyer market, who make up around 80 percent of the FHA’s total originations. That percentage plunged to about 75 percent during the recession but has tiptoed back up to nearly 83 percent today, UI reports.

By contrast, the GSEs’ share of first-time homebuyers historically tracked much lower than the FHA’s, totaling about 25 percent during the early 2000s. During the housing bubble, it jumped to around 40 percent. After receding slightly during the recession, the GSEs’ share of first-timers has maintained an upward trajectory since 2013. It sits at nearly 50 percent today, the report notes.

When combining the FHA and GSEs, the total share of first-time homebuyers taking out purchase mortgages in 2017 amounted to 60 percent—around 20 percentage points higher than the 40 percent pre-crisis average.

Why the flood of first-timers post-crisis? The reason is two-fold, according to UI: “Partly, it’s the better economy. But a big chunk of the increase is driven by the pullback of repeat buyers.”

The report found that between 2001 and 2007, repeat homebuyers represented anywhere from 1.4 to 1.8 million home purchases per year, while first-timers accounted for between 900,000 and 1.3 million. The two cohorts have since switched. Last year, repeat buyers purchased just over a million homes, while first-time buyers snapped up to close 1.5 million.

“Falling house prices during the recession prevented millions of homeowners from accumulating equity in their homes, equity they have typically used to trade up to bigger homes,” UI reported.

Since prices have picked up and home equity is rising again, will repeat buying activity reclaim its historic levels? “Probably not,” the report said.

Owners may have more equity today, but most of them also have very low mortgages they locked in during the recession—when rates routinely measured below 4 percent. If, for example, a homeowner with a 3.5 percent rate wanted to upgrade to a different home, they’d have to secure a new mortgage at today’s higher rate.

“Many homebuyers will likely find it much more economical to simply stay in their existing homes,” the report said. “This will continue to dampen repeat buying volumes and continue the dominance of first-time homebuyers in the housing market.”

But those first-timers will, quite literally, be paying for that preeminent status, it notes.

“Since existing homeowners won’t release their starter homes into the market, and since we aren’t making up for that deficit through new construction, prices will likely keep going up for first-time homebuyers,” it reported.

A large chunk of first-time buyers are represented by millennials. How can lenders reach out to this group of buyers? On August 23, Join MReport's webinar Hottest Buyers on the Block: Reaching Millennials, presented by Ellie Mae to learn more about the strategies lenders can use to cater to this large, yet often underserved group of buyers. An expert panel will cover pertinent topics such as millennial homebuyer trends, rethinking business strategies for millennials, and the role of digital lending channels. Click below to register today: