Private mortgage insurers (PMI) gained a larger market share than the FHA for the first time in two years during Q2, according to the Urban Institute’s “Housing Finance at a Glance” monthly chartbook for August 2016.

“We have also seen a more focused effort by some larger lenders to take advantage of lower down payment lending available through the GSEs,” Urban Institute wrote. “Whatever is driving the shift, this development simply restores the FHA/PMI market share to the levels seen in 2014.”

“If the PMIs take away a significant volume of FHA’s lower credit risk business, over time that shift towards a riskier mix of borrowers will put pressure on the FHA’s balance sheet,” the Urban Institute researchers wrote. “Indeed, it may increase the pressure on FHA to lower premiums in an attempt to take some of that higher quality business back.”

When FHA reduced mortgage insurance premiums by 50 basis points in January 2015—a move designed to invite more first-time homebuyers into the housing space—FHA’s market share spiked from 34 percent in 2014 to 40 percent in 2015, while PMI’s share experienced a corresponding decline for the same period (40 percent down to 35 percent). 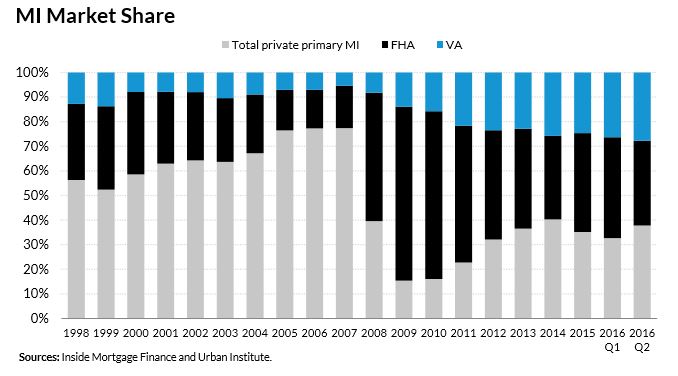