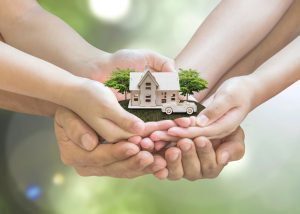 It’s no secret that rent prices are taking a big bite out of many Americans’ incomes, especially for those not in a position to purchase a home. Even worse, it’s a real obstacle toward being able to save toward a down payment that could make buying a home a feasible possibility. A new report from Zillow highlights just how bad it’s become—renters are spending nearly $2,000 a year more in 2017 than they would have been prior to the housing bubble.

According to Zillow’s analysis, the median U.S. rental costs 29.1 percent of the median monthly income. Compare that to the numbers before the housing bubble: between 1985 and 2000, typical renters were spending just 25.8 percent of their income on rent. That translates to an increased expenditure of $1,957 per year in 2017, as opposed to if that percentage had remained the same.

Zillow Chief Economist Dr. Svenja Gudell explains that rent taking a bigger bite of monthly income "can mean less cash to put toward paying off student debt, building an emergency fund, or saving for retirement. For those hoping to buy a home, it could be a significant part of their down payment." For example, Zillow’s report explains that the $5,298 annual difference in Dallas, Texas, would be enough to save a 20 percent down payment for a typical home there in eight years. According to an April 2017 Zillow survey, more than two-thirds of renters cite saving for a down payment as the biggest obstacle to buying a home.

In hot markets such as Los Angeles, Miami, and San Francisco, typical renters are spending over 40 percent of their income on housing. The Los Angeles-Long Beach-Anaheim, California MBSA tops the list, with renters spending 48.4 percent of their income on rent in Q3 2017, as compared to 36.2 percent historically. That translates to an additional yearly cost of $8,178.

When it comes to the differential between current rental costs and what those costs would have been if the rental percentages of income had stayed at historic rates, San Jose, California tops the chart. Even though San Jose renters only spend 38.4 percent of their income on rent, they’re spending $13,525 more per year than if those historic rates rates had remained steady.

Previous: How Could Tax Reform Transform the Economy?
Next: Ginnie Mae Pres on Growth: ‘Our Systems Are Volume Agnostic’