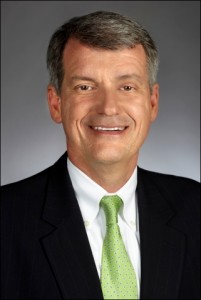 Sloan has been with Wells Fargo for 28 years, and since 2014, he has served at the head of Wholesale Banking—a role he will remain in. Prior to this position, he was Wells Fargo's CFO from 2011 to 2014.

The bank also reported that in 2010, he was named Chief Administrative Officer, where he oversaw the company’s brand, reputation management, stakeholder engagement, and people development. Sloan has also served 23 years' experience in corporate, commercial, and real estate banking, where he was in charge of Commercial Banking, Commercial Real Estate, and Specialized Financial Services.

“As we prepare for Wells Fargo’s future, Tim is an ideal choice to lead one of the best teams in banking as they accelerate investments and drive change that position us for growth and enhance the many ways in which we help our customers succeed financially,” Stumpf said. “Tim has been a go-to leader throughout the post-financial crisis period and our historic Wachovia merger, having served as our CFO and CAO, and leading top businesses and organizations. He has earned the respect of his peers and our stakeholders by demonstrating his passion for putting customers first and for the kind of relationship-building that has been a hallmark of Wells Fargo’s finest leaders.

Stumpf added, "I look forward to working with Tim and the rest of our senior leadership team, because there has never been a more exciting time to be in banking,"  "Wells Fargo is becoming more agile and more innovative while keeping its focus on what customers demand from their financial institution: a trusted relationship. We will pursue Wells Fargo’s future without ever losing sight of the needs of our customers, team members, investors and communities.”