With the release of Fannie Mae’s most recent Home Purchase Sentiment Index on Thursday, it seems consumers have mixed feelings on the outlook of today’s housing and economic markets.

Overall, the survey is positive, with 18 percent of those surveyed saying now is a good time to sell a home—an increase of 5 percent from May—and 32 percent saying it’s a good time to buy, a jump of 3 percent over last month.

Fewer consumers expect pricing increases, too. According to the survey, only 33 percent expect home prices to go up in the next 12 months—a 9-percent drop from last month’s survey. Another 41 percent expect mortgage rates to continue dropping over the next year.

But while many consumers think the market is right for buying and selling an affordable home, it seems economic factors may be getting in the way. The survey revealed that more Americans are concerned with losing their jobs—up 4 percent from May—and that overall incomes are dropping. In fact, the share of participants who said their income is significantly higher than 12 months ago dropped by 10 percentage points—down to 8 percent, the biggest monthly drop in the HPSI’s history. 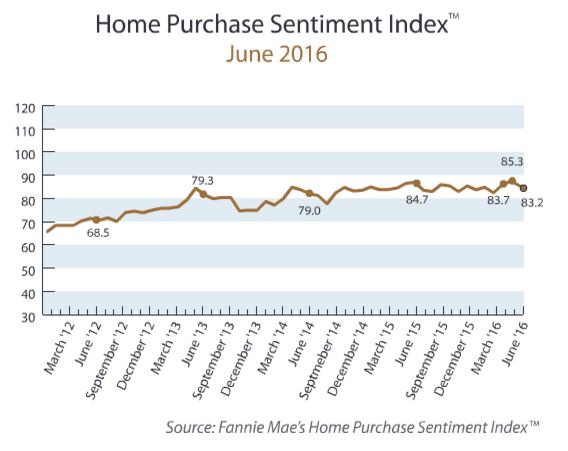 “Growing pessimism about the overall direction of the economy gives us further pause as it now stands at the highest level we’ve seen in our National Housing Survey in the last two years,” said Doug Duncan, senior vice president and chief economist at Fannie Mae. “Meaningful improvement in the housing market going forward will likely require consistent upward movement in consumers’ income growth perceptions, which have thus far been stagnant.”

Once all aspects of the survey were considered, the total index for the HPSI dropped 2.1 points, from 85.3 to 83.2, between May and June. It is down 1.5 total points since the same time last year.

“The HPSI’s pullback in June from last month’s survey-high reading suggests a slight weakening in the 12-month outlook for housing activity,” Duncan said. “Pending home sales have pulled back in the face of continued home price growth, and we’re seeing some softening in the higher priced components of the market.”

The HPSI polls 1,000 Americans via telephone regarding their attitudes on homeownership, home pricing, the economy, and other market factors. It is released on a monthly basis.

Previous: Nationstar Elects Bray Chairman of the Board
Next: FHFA Reports Progress on Single Security Initiative