G-Fees Level Off After Years of Rising Sharply

The guarantee fees, also known as g-fees, charged by Fannie Mae and Freddie Mac leveled off in 2015 after more than doubling in the prior five-year period, according to the FHFA’s annual report on the fees to Congress, released Monday.

The FHFA is required by the Housing and Economic Recovery Act (HERA) to submit a report annually to Congress on g-fees, which are intended to cover costs that Fannie Mae and Freddie Mac incur for guaranteeing the payment of principal and interest on single-family loans they acquire from lenders.

The average single-family guarantee fee rose by just two basis points in 2015, up to 59 basis points.

“This stability is consistent with FHFA's April 2015 determination that the fees adequately reflected the credit risk of new acquisitions after years of sharp fee increases,” the report stated. “During the five-year period from 2011 to 2015, fees had more than doubled from 26 basis points to 59 basis points.” 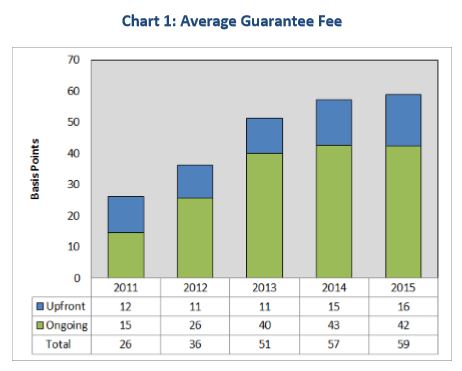 A comprehensive review of the adequacy of g-fees charged by the GSEs completed by the FHFA in April 2015 found “no compelling economic reason to change the overall level of fees. The FHFA did, however, direct the GSEs to make certain adjustments effective with September 2015 deliveries. One of the specific changes the FHFA directed the GSEs to make was eliminating the 25-basis point upfront adverse market charge (in place since 2008) and replace revenue lost from eliminating the charge with changes to other upfront fees, addressing risk-based and access-to-credit considerations.

“Overall, the modest changes were approximately revenue neutral for the Enterprises,” the report stated.

According to the report, acquisitions showed an improvement in expected profitability measured in the difference between the charged g-fee and modeled costs—including targeted return on modeled economic capital that has been calculated for these loans.

“The Enterprises expected their 2015 acquisitions to generate returns in line with their targeted levels,” the report stated. “In 2014, expected returns on the yearly acquisitions were below the targeted level. The improvement in 2015 was mainly due to an acquisition loan mix that represented lower credit risk as compared to the prior year.”

Previous: Want to Rent an SFR Property? It’ll Cost You
Next: Construction Spending Can’t Climb Out of Doldrums