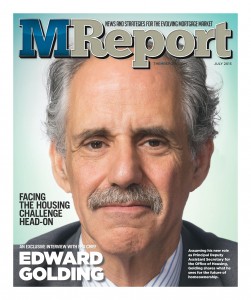 HUD Secretary Julián Castro has called 2015, “The year of housing opportunity.” So when he announced in late March that he was tasking Edward Golding with the newly created role of Principal Deputy Assistant Secretary (PDAS) for the Office of Housing, all attention turned to what this new figure would bring to the role—one he took over from acting commissioner of the FHA Biniam Gebre.

Dedicated visionary, and optimist about the future of homeownership, Golding has spent more than 25 years in mortgage finance in both the public and private sector. Prior to joining HUD in 2013, he held several senior positions during a 23-year tenure with Freddie Mac—where he served as SVP of Economics and Policy, Program Executive of Making Home Affordable, SVP of Economics and Strategic Analysis, and SVP of Capital Oversight and Economics.

Despite his busy schedule shaping the future of American homeownership, Golding sat down with us this month to address your pressing questions on the FHA, mortgage insurance, housing, down-payment, assistance, and more.

While the full interview isn’t available until July 1 [2], we couldn’t couldn’t help but give you a sneak peak . . .

MReport // What is FHA’s outlook for homeownership levels in the near term?