Home >> Daily Dose >> Over Half of Underwater Borrowers Are Nowhere Near Re-Surfacing, Report Says

Over Half of Underwater Borrowers Are Nowhere Near Re-Surfacing, Report Says 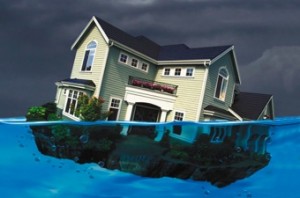 Borrowers who owe more money to banks than their home is worth is slowing decreasing, however more than half of these borrowers are stuck in an underwater free fall with little to no hope of resurfacing.

According to Zillow’s first quarter Negative Equity Report released today, although the negative equity rate is falling, more than half or 4 million homeowners owed the bank at least 20 percent more than the worth of their home. In order for these underwater homeowners to even come close to breaking a sale, their homes would have to appreciate by at least 20 percent.

"It's great news that the level of negative equity is falling, but what really worries me is the depth of negative equity,” said Dr. Stan Humphries, Zillow’s chief economist. “Millions of Americans are so far underwater, it's likely they may not re-gain equity for up to a decade or more at these rates," "And because negative equity is concentrated so heavily at the lower end, it throws a real wrench in the traditional housing market conveyor belt.”

Zillow reported that the U.S. rate of negative equity among mortgaged homeowners was 15.4 percent in first quarter of 2015, a decrease from 16.9 percent last quarter. A year ago, this rate was 18.8 percent. The rate of underwater homeowners was much higher among the homes with the least value.

Negative equity improved in all of the 35 largest housing markets in the first quarter, Zillow says. This could be a sign that the country is steadily recovering from the lax lending rules and subsequent housing market bust of the last decade.

More than 15 million homeowners owed more on their mortgages than their homes were worth, placing them in negative equity at the peak of the real estate crisis, the report says. Foreclosures, short sales, and rapidly rising home values saved 7.9 million of these homeowners from the pool of negative equity by the end of the first quarter. Those that remain underwater are expected to be the most severe cases to repair.

Spring and summer are the busiest buying and selling seasons, Zillow says in the report. This year, there has been a high demand for homes in the bottom third of the market. However, a disproportionate number of those homeowners can not afford to sell to buyers looking for homes in their price range. Zillow found that more than 25 percent of those who own the least valuable third of homes were upside down, compared to about 8 percent of the most valuable third of homes.

“Potential first-time buyers have difficulty finding affordable homes for sale because those homes are stuck in negative equity. And owners of those homes can't move up the chain because they're stuck underwater in the entry-level home they bought years ago. The logjam at the bottom is having ripple effects throughout the market, and as home value growth slows, it will be years before it gets cleared up. In the meantime, we'll be left with volatile prices, limited inventory, tepid demand, elevated foreclosures, and a whole lot of frustration."

Home values are forecast to continue rising, but at a slower pace than recent years, Zillow says. Quicken Loans, reported on Tuesday that the difference between appraiser and homeowner perceptions of home values continued to increase for the fourth consecutive month in May. For the first time in 22 months, appraiser opinions of home values were 1.15 percent lower than homeowner estimates, according to Quicken Loans’ national Home Price Perception Index (HPPI).

“The HPPI, more than anything, is a reminder that there is no such thing as a national housing market,” said Bob Walters, Quicken Loans chief economist. “Every city, and every neighborhood, moves in different directions based on local factors. Consumers need to remember to watch their local area closely to understand the direction their market is heading.”