Despite yesterday's report that home builders' confidence was down, they have certainly been busy with new construction in November 2015.

Confidence among home builders dipped down slightly in December, but builders remain optimistic about the housing market.

For the second consecutive month, builder confidence in the market for newly constructed single-family homes decreased, this time one point to 61 in December, the National Association of Home Builders (NAHB) reported in their Wells Fargo Housing Market Index (HMI).

“For the past seven months, builder confidence levels have averaged in the low 60s, which is in line with a gradual, consistent recovery,” said David Crowe, NAHB Chief Economist. “With job creation, economic growth and growing household formations, we anticipate the housing market to continue to pick up traction as we head into 2016.”

The U.S. Census Bureau and HUD reported Wednesday that new residential construction statistics for November 2015 showed that privately-owned housing starts shot upward, reaching a seasonally adjusted annual rate of 1,173,000. This number is up 10.5 percent month-over-month from the revised October estimate of 1,062,000 and up 16.5 percent year-over-year from 1,007,000 in November 2014. 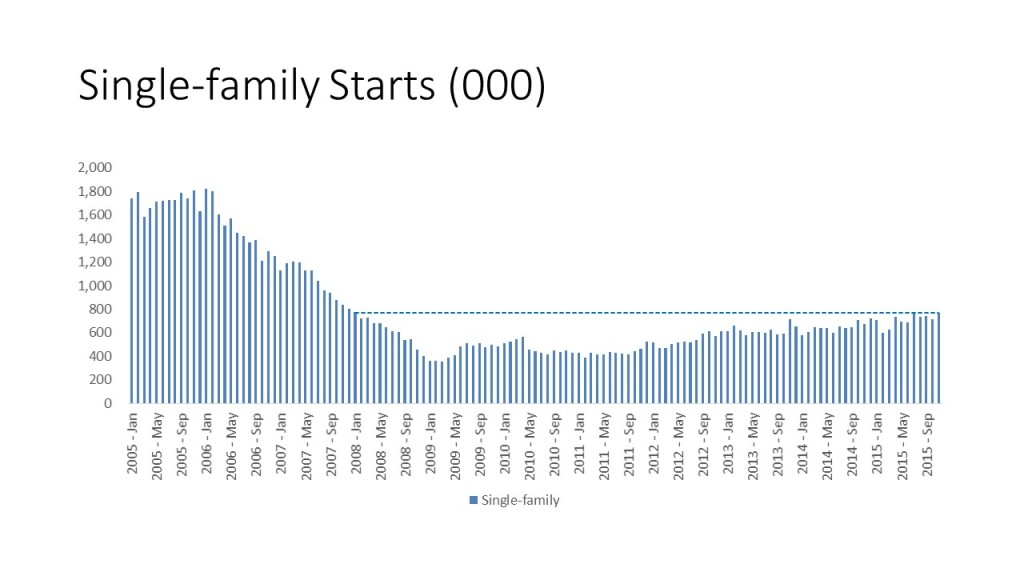 Meanwhile, single-family housing starts experienced a 7.6 percent increase to a rate of 768,000 in November.

Capital Economics' Property Economist Matthew Pointon said in response to the numbers that builders confidence is up without a question, despite the NAHB's report yesterday and home building will be strong to end 2015.

"Starts therefore look set to end the year on a strong note. And with earnings growth due to finally pick-up in 2016, and credit conditions set to continue easing at a gradual pace, homebuilding is well placed to withstand the first rise in interest rates in nine years," he explained.

"With housing demand gradually rising on the back of a strong labor market and a slow loosening of credit conditions, but the inventory of existing homes on the market very low, builders have had no trouble in selling the homes they complete," Pointon said.

Pointon noted that the confidence among builders is shown through the amount of building permits.

The Census Bureau and HUD reported that building permits for privately-owned housing units were at a seasonally adjusted annual rate of 1,289,000, up 11.0 percent  from the revised October rate of 1,161,000. Year-over-year, this number has increased 19.5 percent from 1,079,000.

Single-family authorizations in November were at a rate of 723,000, an increase of 1.1 percent from the revised October figure of 715,000, the data showed.

In terms of housing completions, the November rate was at a seasonally adjusted annual rate of 947,000 for privately-owned housing, down 3.2 percent month-over-month, but still up 9.2 percent year-over-year, according to the report.

He continued, "Younger, newly-formed households are headed for apartment rentals in record numbers as the millennial generation begins to move out of their parents’ homes and into their own living arrangement. Current home owners who have delayed moving because of economic reasons are finally taking advantage of low mortgage rates and affordable home prices to make the move they postponed. Neither movement is expected to be dramatic but rather a small speed up in the trends that have been developing over the past two years as the economy cures, employment grows and consumer confidence returns."