The gap between what homeowner estimate the value of their homes to be and what appraisers say widened in December for the first time in six months, according to the latest Quicken Loans National Home Price Perception Index (HPPI).

The National HPPI showed the average appraisal value fell 1.33 percent below owner expectations, a reversal of the narrowing trend in the second half of 2016. Quicken said that the decline in average appraisal value “erases all improvement made in the last few months.” The gap between owner expectations and actual appraiser value narrowed for five consecutive months from June to October; for October, appraised values were only 1 percent lower than owners’ perceptions on average.

Just as perceptions lost some ground in November, so too did appraisal values themselves. According to Quicken’s National Home Value Index (HVI), the average home value in December was 1.19 percent lower than in November. However, appraised values continue to rise on an annual basis, increasing 3.85 percent year-over-year.

Important to note, however, is that despite the overall lower numbers nationwide, there were significant variations in value across various regions of the country. For instance, estimates from homeowners were 3 percent higher than appraised values in Philadelphia and 3 percent lower in Denver. Homeowners in Philadelphia, Baltimore, and Cleveland were the most optimistic about their homes’ values; those in Denver, Portland, and Dallas were the least. 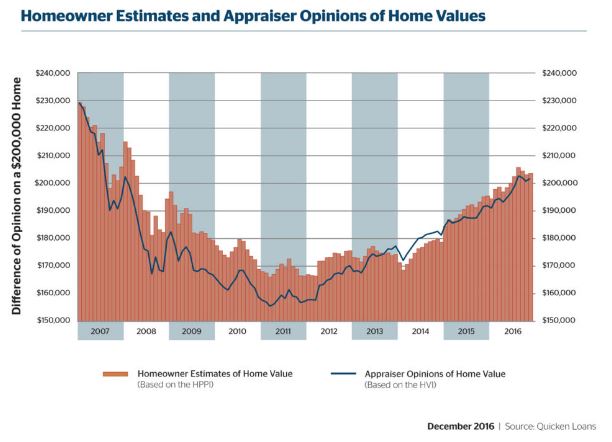 Despite the dip from the previous month, home values continued to climb higher year-over-year by 3.85 percent nationally. However, as the report noted, growth was at a slower pace than the 5.28 percent annual increase in November. Appraised values showed strongest annual growth in the West, while the Midwest had the slowest gains.

“Home value growth has been mostly driven by enthusiastic buyers vying for a smaller than usual inventory of properties,” said Bob Walters, Quicken Loans’ chief economist. “Appraised values have dipped along with the seasonal decline in sales around the winter months. It’s yet to be seen if value growth will build as sales rise in the spring, or as construction increases.”