Home >> Daily Dose >> Shaping the Future of HUD and FHA 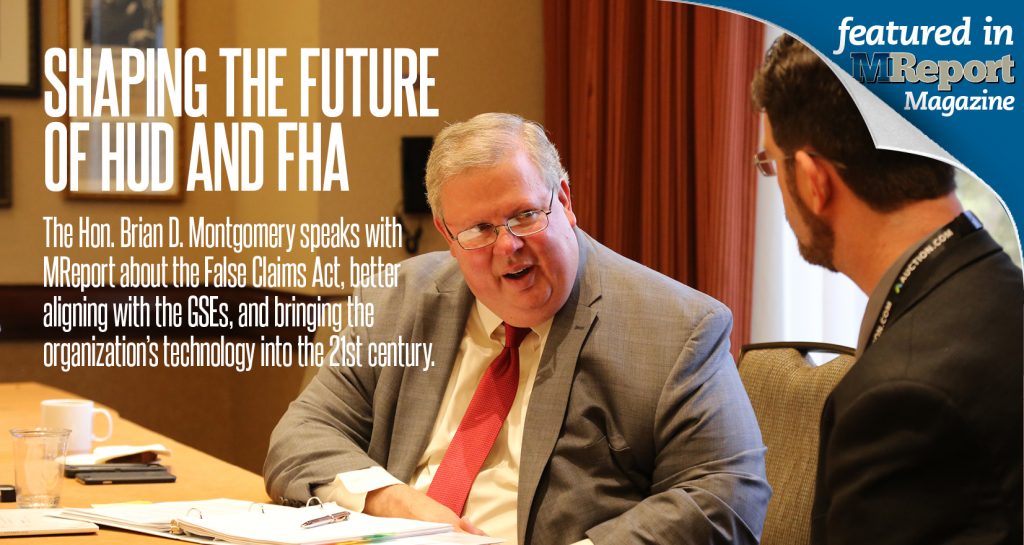 Editor’s note: This feature originally appeared in the January issue of MReport.

On October 8, 2019, the U.S. Department of Housing and Urban Development (HUD) announced that Brian D. Montgomery had been nominated to serve as Deputy Secretary of HUD. It was one high point in a career filled with many, as Montgomery was already serving as HUD’s Assistant Secretary for Housing and Federal Housing Commissioner. Under this new role, Montgomery would manage the day-to-day operations of the agency and assist HUD Secretary Dr. Benjamin Carson in leading the department’s nearly 8,000 employees.

“Brian brings tremendous experience to our team and has been a strong voice in the effort to reform the Nation’s housing finance system,” Carson said in a statement. “As Federal Housing Commissioner, Brian made certain FHA remains a stable and reliable resource for first-time and minority homebuyers, and other underserved borrowers while protecting the interests of taxpayers. Brian is a key member of our team, and I look forward to having him confirmed as our Deputy Secretary.”

Montgomery—the first person to serve as the head of the Federal Housing Administration twice and under three different Administrations—said of the nomination, “Once again, I am tremendously honored to be called upon by President Trump and Secretary Carson to serve this Department and the American people. Service to our fellow Americans is the cornerstone of our Department, and I look forward to continuing to help fulfill HUD’s critical role.”

Shortly before that nomination, Montgomery spoke exclusively to DS News about the challenges and priorities he was engaged with at HUD and FHA, and we’re pleased to bring you the content of that discussion in this, the first issue of 2020. Read on for insights from one of the key figures helping shape the industry in 2020 and beyond.

What are your top three priorities at FHA as you approach the new year?

Well, there’s probably several top threes, or maybe a top 300. One, you saw with the housing finance reform paper. FHA has stayed true to its mission as the hallmark of first-time homebuyers, minority homebuyers, and low- to moderate-income homebuyers for decades. It is not our goal to encroach upon the private sector, or certainly the conventional market, and private mortgage insurers have a significant role to play with the GSEs, but we want to make sure FHA is there in the good times and the bad.

Technology is another focus. When I had this job before in the Bush and Obama administrations, I used to say, “We need to get our technology into the late ‘90s.” Little did I know, 10 years later, we’d still be saying that. Luckily, Congress got behind us and provided an initial $20 million on what we hope will ultimately be an $80 million allotment toward updating almost our entire technology suite.

The third leg of that stool is that we want to protect taxpayers. We are, by and large, self-sustaining. Each year we have to make sure we have more cash inlays than cash outflows. We’re not chasing a profit, per se, but Congress does require us to bring in more money than we pay out in claims, and we have a long record of that. FHA has been around since 1934, and I see it living far into the future.

How is the FHA working to assist the needs of minority borrowers on the path to homeownership?

As I mentioned, FHA has been the hallmark of minority homebuyers for decades, and that hasn’t changed. It’s ebbed and flowed, and I believe minority homeownership is now around 36%.

We would like to see an increase in these numbers across the board, especially in African American homeownership, which is lower across the entire housing market. There have been some studies done by the Urban Institute and others on this topic, and under the direction of the Secretary, we conveyed an internal team a few months ago to focus on this demographic.

We have begun rolling up our sleeves and looking at these numbers. The Urban study was helpful, but we have some of our own beliefs about it. The key thing here is that we want to make sure that any homeownership—minority or otherwise—is approached responsibly and in a sustainable manner. We want to make sure folks are ready for homeownership before we have them make a major investment, which hopefully puts them on a trajectory to continue to grow their personal wealth over their lifetime.

How is FHA working to protect taxpayers from further exposure to risk?

We were able to bring in Keith Becker, who had retired from Freddie Mac as a senior credit officer, to be our Chief Risk Officer. We have a great risk team at HUD, but having somebody at the very top, and who served a similar role at Freddie Mac for many years, is extremely helpful. He has brought some ideas to the table that provide an additional perspective.

in 2019, after the previous administration eliminated from FHA’s TOTAL Mortgage Scorecard what they called Review Rule 14, which required lenders to perform additional underwriting on mortgages where the borrower’s credit score was below 620 and with a DTI around 43. In August of 2016, they pulled the rule out of the TOTAL Scorecard technology so that more of these mortgages would be allowed without manual underwriting. Those cohorts, since around September 2016, were modeled on a 1.4% capital ratio. As you know, Congress requires us to be at a 2.0% capital ratio. Not everyone understands the intricacies of the FHA’s finances and the actuarial accounting, but they do understand that 1.4% is less than 2%. So, we had to make some changes to the TOTAL Scorecard algorithm. Another area of focus is cash out refinances. It’s just grown astronomically.

They’d gone up 250% over the last several years. While refinances can be a good thing, we felt strongly that people were refinancing from a conventional to an FHA mortgage because they got better terms. We were becoming a de facto ATM. We also want to make sure people preserve the equity on their home responsibly, because we have a fiduciary duty to the other folks whose mortgages are insured within our Fund. Some of the consumer groups have reached out to us, and we walked them through why we were doing what we were doing.

I call it attenuating the dial. When I first took over this position during the Bush administration in 2005, the FHA insurance fund was about $350 billion, which I used to think it was a lot of money. It’s over $1.4 trillion now, approximately $1.3 trillion of which is for our Single-Family portfolio.

You’ve mentioned technology as a focus since you initially returned to FHA under the Trump administration. How are you progressing on that front?

The previous administration did some substantial technology upgrades, such as implementing the Loan Review System, which included our Defect Taxonomy. However, the “internal plumbing” of HUD’s technology has not been updated in generations.

So, we felt that we needed to do something with that. In some respects, by not having the funds to do the upgrades we needed for so long, it’s going to allow us to leapfrog over a 20-year gap of technology improvements. We felt that we needed to get off the mainframes that we have had, not just within FHA but within all of HUD. Those mainframe migrations are expensive and time-consuming, but we needed to move to a cloud system with a single portal and point of entry, from origination to claims, and providing more electronic capability for e-closings and emortgages. We eventually want to get away from paper entirely, although that’ll take a while. We’re looking to do robotics processing automation within claims.

We are using this technology to build out our forward mortgage claims technology, and then to handle HECM claims. That technology just barely existed a few years ago, but we’ve already been deploying it elsewhere in HUD. We’re excited that we’re able to be more efficient, have fewer errors, require fewer workaround solutions, and to better monitor the risk. It’ll take several years to get it done, but we’re moving along at a good pace.

We have a very long checklist. We have a tremendous CIO, David Chow, and a tremendous CFO, Irv Dennis, who retired from E&Y after 36 years and was going to go teach at Ohio State. Next thing you know, he’s our CFO. He’s been helpful in ways I can’t even describe. We have a fantastic team in place.

Beyond the technological challenges, what other policies and procedures have you worked to streamline within HUD and FHA?

Servicing is a big area, and that’s why we wanted to attract some former GSE employees. FHA is an outlier for several reasons, and some of them make sense, and some of them don’t. But we thought if there’s a way to better align some of those programs and procedures, that makes sense, whether it’s loss mitigation, disaster recovery, conveyance, and so on. It’s two different models, but there are ways we can better align with what the GSEs are doing.

[Editor’s note: In October 2019, HUD announced significant changes to how HUD will handle matters related to the False Claims Act, with Secretary Benjamin Carson telling CNBC’s Squawk Box, “We revised the annual eligibility certifications, the loan limit certifications, and the defect taxonomy so that we even out things.” The segment below represents FHA Commissioner Montgomery’s thoughts on the issue prior to that public announcement.]

There are also opportunities around our loan-level certifications, our annual certifications, the defect taxonomy, and the False Claims Act. We want to bring a little common sense to when the False Claim Act is the most appropriate use of the government’s enforcement abilities. It has had the effect of driving many of the depositories out of the FHA program. As recently as 2010, almost half the FHA’s partners were depositories.

Today, it’s about 13%. We need to find some balance. To have the largest depositories in this country not participating in a nation’s flagship homebuying program, that doesn’t sit well with me. We have the end goal of trying to bring a little more structure to the process.

Previous: Shift From Single-Family Homes Could Represent ‘Revolution’
Next: The Week Ahead: Will Existing Home Sales Rebound?