With builders in the single-family housing market anticipating regulatory relief from the soon-to-be-installed administration, builder confidence in the market shot up in December to its highest level in more than 11 years.

For January, the National Association of Home Builders/Wells Fargo Housing Market Index (HMI) declined by two points from December to a level of 67, but it still on “solid” footing, according to NAHB.

“The solid reading is consistent with building expectations heading into the new year,” NAHB Chief Economist Robert Dietz said. “NAHB expects 10 percent growth in single-family construction in 2017, adding to the gains of 2016. However, ongoing industry concerns include rising mortgage interest rates as well as a lack of lots and access to labor.”

Builders, sensing that regulatory relief may be imminent from the increasing costs of building regulations (which have jumped by 29 percent since 2011), turned in an HMI reading of 70 for December (later revised down to 69)—its highest level since July 2005. 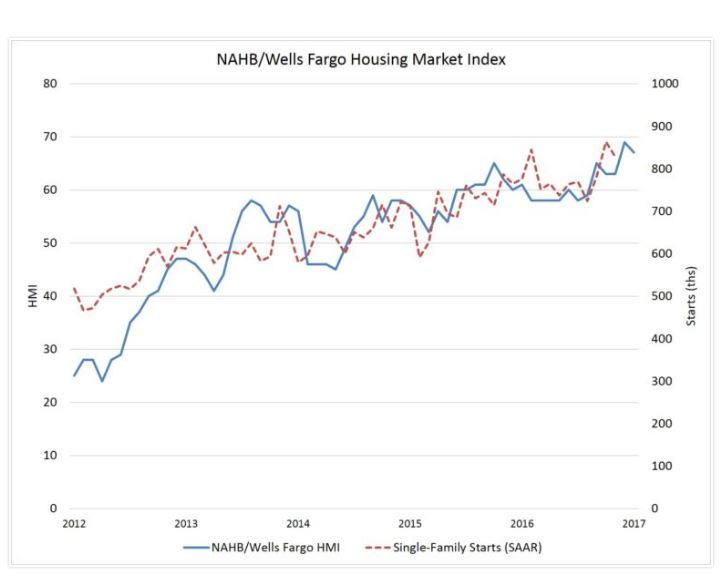 While the HMI’s overall reading of 67 remains solid, all three components of the Index declined in January. The current sales conditions and sales expectations for the next six months components fell by three points and two points, respectively, to 72 and 76. The buyer traffic component, which rose above 50 for the first time in 11 years in December, inched down by one point to 51 in January.

President-elect Donald Trump will be inaugurated on Friday, January 20. One of Trump’s themes during his campaign and particularly since he has been elected is reducing regulation. Members of the NAHB heard from Trump in person last summer on the topic of reducing regulatory burdens at the NAHB 2016 Midyear Board of Directors Meeting in Miami. Trump told the builders at that meeting that “nobody other than, I would say, the energy industry, that is overregulated more than the homebuilding industry.”