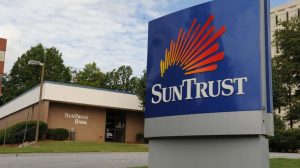 BB&T and SunTrust have announced that they will combine in an all-stock merger valued at $66 billion to create the sixth-largest U.S. bank based on assets and deposits.

According to Reuters, this is the biggest bank deal since the 2007-2009 financial crisis with the combined company expected to operate under a new name and have around $442 billion in assets. It is expected to have $301 billion in loans and $324 billion in deposits.

The new entity would be combining the current reach of BB&T and SunTrust bank to reach 10 million households and would have a Top 3 market share across eight states.

"This is a true merger of equals, combining the best of both companies to create the premier financial institution of the future," said Kelly S. King, Chairman and CEO at BB&T. "It's an extraordinarily attractive financial proposition that provides the scale needed to compete and win in the rapidly evolving world of financial services. Together with Bill's leadership and our new SunTrust teammates, we're going to bring the best of both companies forward to serve our clients and communities."

Looking at the strategic and financial benefits of the merger, the banks said that the combined company would preserve and maintain the strong cultures of BB&T and SunTrust to "deliver superior client service and preserve the community banking model to maintain close ties to shared local communities." In terms of financial profile and operating metrics, the merger is expected to generate an internal rate of return of around 18 percent.

The companies said that the merged entity would also take advantage of its enhanced scale to focus on selecting best of breed systems and processes and making significant investments in technology to "create a sustainable competitive advantage in an increasingly digital-first world."

"By bringing together these two mission- and purpose-driven institutions, we will accelerate our capacity to invest in transformational technologies for our clients. Our shared culture embraces the disruption of technology and we will take this innovative mindset to expand our leadership in the next chapter of these historic brands," said William H. Rogers Jr. Chairman and CEO of SunTrust. With our geographic position, enhanced scale and leading financial profile, these two companies will achieve substantially more for clients, teammates, associates, communities, and shareholders than we could alone. I have tremendous respect for Kelly, his leadership team and the BB&T associates. We will leverage our respective strengths as we focus together on the future."

The transaction for this merger is expected to be completed by the fourth quarter of 2019.