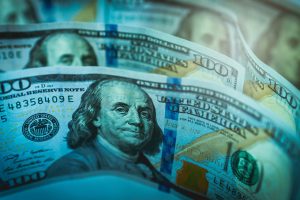 Federal Reserve Chairman Jerome Powell—in his testimony Wednesday before Congress—indicated that the central bank would proceed with vigorous actions aimed at aiding the country's recovery from the pandemic-related economic recession.

"While we should not underestimate the challenges we currently face, developments point to an improved outlook for later this year,” Powell said in his prepared remarks delivered to the committee. “Economic recovery remains uneven and far from complete, and the path ahead is highly uncertain."

Powell fielded numerous questions from Republican senators hesitant to support President Biden's $1.9 trillion relief package. Some cited concerns about overspending, which could lead to inflation that could too-significantly raise the prices on everything from groceries to mortgages.

Powell brushed off some of those concerns, saying he does "not expect we’ll be in a situation where inflation rises to troublesome levels" at this time.

He refused to take a position on Biden’s proposal, saying that it was up to Congress and the administration to decide.

He indicated the Fed will continue buying $120 billion per month in securities and mortgage-backed debt and will keep interest rates near zero.

As he said before the Senate Banking Committee on Tuesday, holding down interest rates and leveraging the central bank’s balance sheet to encourage asset purchases is the best way to ease labor-market and broader economic challenges, Powell told Congress.

It could take more than three years to reach the Federal Reserve's inflation goals (the Fed has said it will not raise interest rates until inflation has exceeded 2%).

"The economy is a long way from our employment and inflation goals," Powell said, "and it is likely to take some time for substantial further progress to be achieved. We will continue to clearly communicate our assessment of progress toward our goals well in advance of any change in the pace of purchases."

Housing remains a bright spot in the economy, Powell acknowledged in his prepared remarks, adding that government action has aided all sectors.

"The housing sector has more than fully recovered from the downturn, while business investment and manufacturing production have also picked up. The overall recovery in economic activity since last spring is due in part to unprecedented fiscal and monetary actions, which have provided essential support to many households, businesses, and communities."

When asked if the Fed played a role in increasing the amount of affordable housing, Powell replied, "I don't think we do." The Chairman added that the Bank can help combat lending discrimination.

A recording of the full hearing, which was held remotely, is available at banking.senate.gov/hearings.