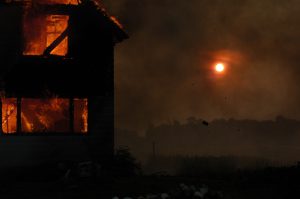 Economists say such concern is warranted.

“Climate change is posing an increasingly large risk to homeowners. As storms, wildfires, and rising sea levels render more areas undesirable in the coming years, housing values in those areas will decline. This means a growing number of homeowners will see a major source of wealth—their home equity—wiped away,” Daryl Fairweather Redfin's Chief Economist said. “We may also see folks in at-risk areas choose to rent instead of own to avoid getting stuck with devalued properties.”

Recent research conducted by Redfin's team revealed that while 35% of 2,000 who responded to their survey said, "no," they do not believe climate change will negatively impact the value of their homes, 21% said it already has had that negative impact.

Twenty-three percent believe climate-related disaster will impact their homes in the next five years. Another 20% think that a negative impact will occur within the next 20 years. 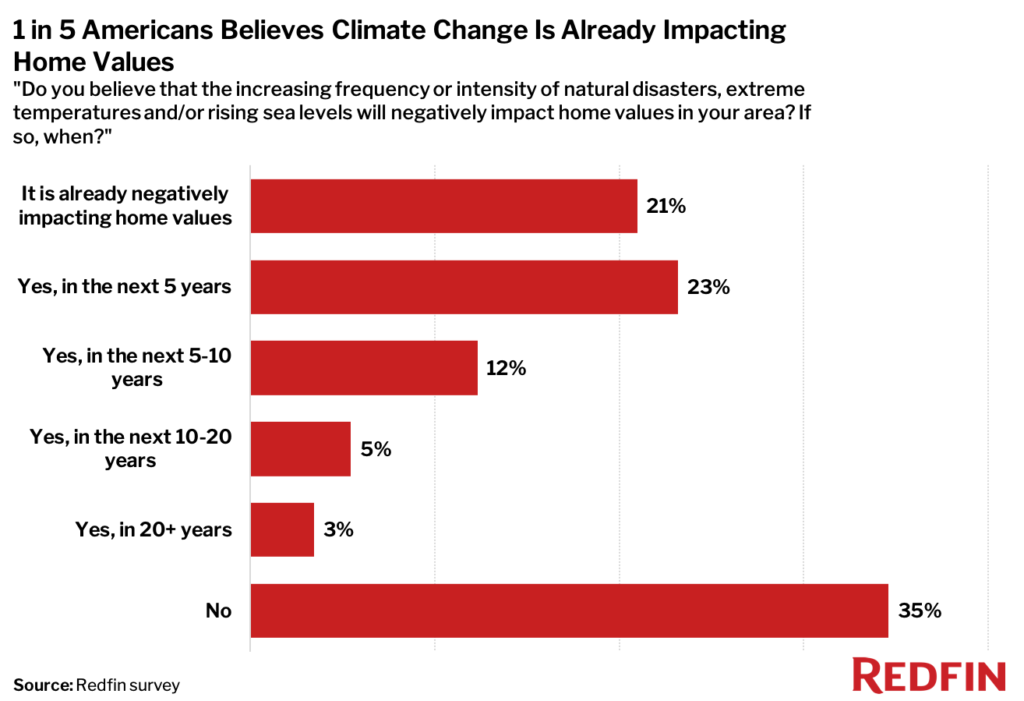 Redfin's researchers probed deeper into the mindset of those 419 respondents who indicated that they believe home values in their area are already being negatively impacted by the increasing frequency/intensity of natural disasters, extreme temperatures, and/or rising sea levels.

They unearthed the following key points:

Younger respondents were more likely to say climate change is affecting home values—about a quarter of respondents aged 44 and younger believe home values in their area are already being negatively impacted, reportedly.

Midwesterners were more likely to say that, no, climate change is not affecting home values—the report explained that while the Midwest is warming up and experiencing greater precipitation in some areas, it hasn't seen the sudden uptick in devastating natural disasters that other parts of the U.S. have.

"The West Coast had its most active fire year on record in 2020, with more than five million acres burning across California, Oregon, and Washington, and homes in many wildfire-prone zip codes selling for a discount. And in Texas, a massive winter storm in February 2021 left 111 people dead and millions without power."

City dwellers are more apt to believe climate change is impacting housing values—27% compared with 17% of respondents living in suburban areas and 16% living in rural areas.

Furthermore, of 1200 respondents who own their properties, 59% have invested in making their homes more resilient to at least one climate-related risk, with 36% spending $5,000 or more.

For example, ever since the destructive 2017 Tubbs Fire hit northern California, residents who remained in the area have been working and spending to strengthen their homes, according to Napa, California Redfin real estate agent Christopher Anderson.

“Homeowners are fireproofing their houses and empty lots and removing dead trees and bushes. If they have wood-shake roofs, they’re changing them out for roofs made of concrete or some other material that doesn’t burn. They’re replacing wooden fencing with steel fencing, and wooden decks with stone patios,” Anderson said. “Buyers are also paying more attention than they used to. They’re looking at every property a bit more closely. How close did the fire get? What steps has the seller taken to mitigate fire risk?”

"About two-thirds (65%) of surveyed homeowners have a home insurance policy covering some type of natural disaster," according to the authors of the study. "Flooding is the most common threat for which homeowners possess insurance, with a third (33%) of respondents indicating they have policies to protect against this risk. Next come tornadoes (29%), earthquakes (22%), hurricanes or other major tropical storms (19%), and wildfires (15%)."

The survey, available at Redfin.com, further breaks down spending and explains the researchers' methodology.