Home >> Daily Dose >> Many Buyers are Relocating to Low-Tax States

Many Buyers are Relocating to Low-Tax States 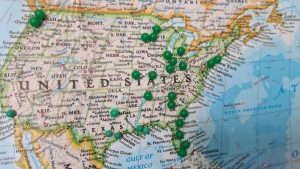 Taxes appear to be playing an increasing role as Americans—many no longer limited to living in the same state where they are employed—decide if and when to relocate.

A Redfin study showed that in low-tax states, four people move in for every one who leaves, while in high-tax states that trend is reversed, notes data journalist Dana Anderson, who summarized the study.

Nevada, which claims the sixth-lowest tax rate in the country, gained more residents than any other state over the last eight years—for every nine people who moved into Nevada from 2013 to 2020, just one person left.

At No. 7 in the country when it comes to low tax rates, Florida gained more residents than all but four other states between 2013 and 2020—for every seven who moved in during that period, only one left.

According to agent Heather Kruayai in Jacksonville, Florida, a slew of relocators are coming to places like her hometown from more expensive, higher-tax states because their jobs have gone remote, a trend spurred by the pandemic but one that is, for many workers, here to stay.

"A lot of people are moving into Jacksonville from places like California and the East Coast because they can work remotely. They figure it’s a pretty good deal to pay no state income tax and live at the beach,” Kruayai said. “Competition and prices are up and supply is down this year, partly due to those out-of-state buyers who sold homes in expensive markets and are buying homes using cash in Florida."

The downside for buyers: As savvy home shoppers increasingly realize and act upon the benefits of low-tax-state living, already-high home prices in those tax friendlier places have increased, Redfin found.

"In Austin, for example, the average out-of-town homebuyer had a 32% higher budget than local residents and home prices were up more than 42% year over year to $465,000 in April. And while Texas doesn’t have an income tax, it does have relatively high property taxes. Higher home prices would result in residents paying even more in property taxes, which would further add to Texas’ cost of living," Anderson explains.

Austin agent Andrew Vallejo explained to Anderson that while there are a lot of reasons to move to Texas, for many homebuyers the fact that there’s no state income tax is one of the most attractive things.

"I have one client who moved his entire company from California to Texas because it has lower taxes. Low taxes are also motivating big companies like Tesla, Apple, and Google to open offices in Austin, which brings in even more people," Vallejo said, adding that "low taxes are contributing to higher home prices in Austin. With so many people moving here, especially those earning six figures and stock compensation from tech companies, prices are multiplying. Builders and sellers can price homes higher than they used to because buyers are willing to pay more."

To read more data and analysis on the topic, visit Refin.com/news.