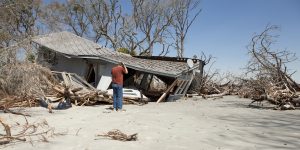 Residents in Dayton, Ohio, have been left to pick up the pieces after three tornadoes caused widespread damage on Monday.

It was reported by ABC News that more than 80,000 people—more than half of Dayton’s reported population—were left without power early Tuesday morning. The storm has caused one confirmed death.

"I don't know that any community that is fully prepared for this type of devastation," Dayton Assistant Fire Chief Nicholas Hosford said Tuesday on ABC's "Good Morning America."

ABC went on to report that there were 51 tornadoes across eight states on Monday—Idaho, Colorado, Nebraska, Iowa, Minnesota, Illinois, Indiana and Ohio—and severe weather remains a threat through Wednesday.

Ohio, and some of its larger metros, are no strangers to these storms.

According to the Redfin report, Columbus and Cleveland have experienced a combined 138 tornadoes. Cincinnati has 46 on record and Columbus’ 78 tornadoes were tied for second most on the list with Atlanta, Georgia, and Minneapolis, Minnesota.

“The disruption of a family’s regular flow of income and payments, as well as substantial loss in property value, can trigger mortgage default; especially if homeowners are underinsured and cannot afford to rebuild,” said Frank Nothaft, Chief Economist for CoreLogic.

Disruption to income from natural disasters including wildfires, tornadoes, and hurricanes can lead to mortgage defaults, and CoreLogic notes that delinquency and foreclosures typically spike in an affected area following a disaster.

“The financial impact of underinsurance touches everyone; this is especially true after a catastrophic event where widespread property damage can cost billions of dollars,” CoreLogic stated in the report.

The 2019 Five Star Disaster Preparedness Symposium will include critical conversations on response, reaction and assistance, to ensure the industry is ready to lend the proper support the next time a natural disaster strikes.

Previous: Who’s the Most Frugal Homebuyer of Them All?
Next: Why Homesellers Should Think Twice About Reducing Prices