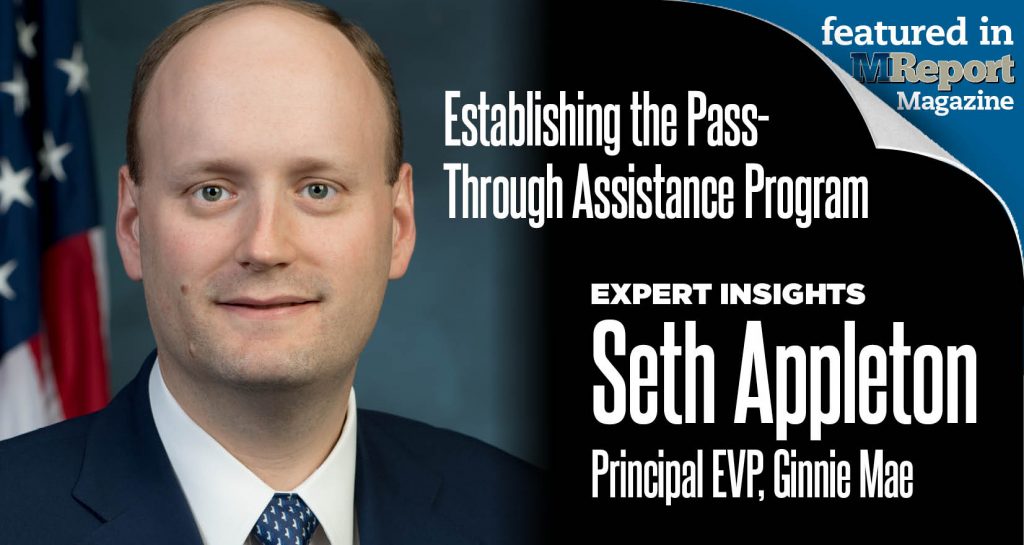 This story originally appeared in the July edition of MReport

Seth Appleton was designated as Principal EVP of Ginnie Mae in October of 2019 by The U.S. Department of Housing and Urban Development’s (HUD) Secretary Dr. Benjamin Carson. In this role, he is focused on bringing global capital to the U.S. government mortgage loan programs by maintaining a liquid and attractive security for investors, modernizing the Ginnie Mae platform, and operating a fiscally sound program that minimizes risks to taxpayers.

What struggles did Ginnie Mae encounter getting the PTAP established quickly?

I’ve worked in the legislative and executive branches for over 15 years now, and it was one of the quickest policy responses I have seen. From the Secretary at the Department of Housing and Urban Development, and across the whole administration, we’ve encountered a spirit of collaboration and support for this project.

There were clearly a lot of operational, accounting, risk management processes, procedures, and checkpoints we had to engineer to get this thing off the ground and to launch it successfully, and those did take a lot of time and effort from dedicated staff, who also have day jobs at Ginnie Mae and are also working in a remote environment. So there was certainly a lot of work in there and there were a lot of issues that we had to resolve quickly, but I was really pleased with the spirit everybody approached this project and how quickly we were able to accomplish it.

What are your thoughts on the federal government to stabilize the mortgage market?

I think you have to look at the broader picture because the current situation is different than some of the previous economic events that we’ve seen, particularly because it’s really a health crisis that’s impacted the economy and housing for sure, and it continues to evolve on a daily basis. I do think the underlying fundamentals of the economy and the housing market were strong going into this and continue to be strong today. What’s been underreported to the degree which the government has mobilized quickly and adapted to confront the crisis that did present itself—again is a public health crisis. I think the evidence of the response is clear when you look at a mortgage market that is continuing to process purchases and refinances on a large scale. We have been doing record volume in our program and that is combining new purchases with refinancing. The housing market that supports our program seems to be very strong still and I think a lot of that can be attributed to the government articulating clear policy solutions and providing guidance as long as issues arise. I’m hopeful that will continue.