The likelihood that home prices will decline is itself declining overall, according to the Fall 2016 Housing and Mortgage Market Review, published by Arch Mortgage Insurance Company. However, energy-producing areas of the country remain at heightened risk for price declines amid decelerating growth.

On the other side of things, states heavy with energy extraction capital (coal, oil, and natural gas extraction) are experiencing decelerating home price growth and remain at heightened risk for declines in home prices, the report stated. North Dakota, Wyoming and West Virginia are most at risk.

“The economies in these three states are currently in recession with weakening employment, due primarily to declines in energy-related jobs,” the report stated.

North Dakota had a 47 percent chance of a price decline of any magnitude over the next two years. Though high, that number is actually down from Arch’s summer estimate of 52 percent. Still, the state has experienced a 2.2 percent drop in year-over-year total employment (the second largest employment decline in the nation) and the state’s home prices are estimated to be overvalued by 21 percent relative to historic norms, the report stated.

“Apart from some underlying issues that continue to hold back the housing sector, ranging from weak wage growth to skyrocketing student debt,” said  Ralph DeFranco, global chief economist for mortgage services at Arch Capital Services, “strong dynamics are now in place that will continue pushing up home prices faster than inflation for the foreseeable future. Positive fundamentals in today’s housing market include affordability, job growth, a shortage of housing, rising rents and underpriced or fairly valued housing in most areas of the country.” 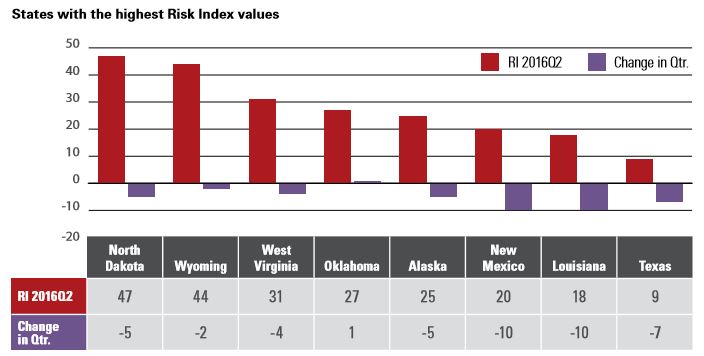 Previous: Housing Policy? Not in This Debate
Next: Appreciation Pace ‘Probably Not Sustainable’. . . But Have No Fear