Some Markets are Failing Another Type of Stress Test

In June, all 33 bank holding companies reviewed as part of the Federal Reserve’s annual stress testing made the grade. Some housing markets in the United States, however, are not doing so well with a different type of stress test.

Twenty of the largest 100 markets in the United States have “mortgage stress,” meaning homeowners’ mortgage repayment is more than 28 percent of their gross income on average in those markets, according to data from Finder.com.

“Mortgage stress is present throughout the nation, but there are some major U.S. cities that have higher mortgage stress rates than others,” the report stated. “Interest costs and the prices of homes are inflating, and salaries and wages are struggling to keep up.” 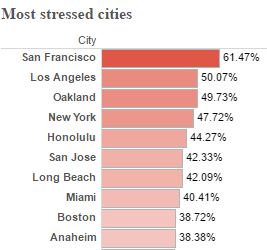 To calculate which markets are experiencing mortgage stress, Finder.com used the median home value, median household income, and annual mortgage repayments in the top 100 most populated U.S. cities and then used that data to find the proportion of mortgage payments in those markets. For example, a homeowner with an annual income of about $51,000 with a $265,000 mortgage who was putting 28 percent of their income toward mortgage repayments would be paying $1,183 monthly.

The average mortgage repayment in proportion to income for the top 100 markets was 20.9 percent, according to Finder.com. California was the state with the most cities that have mortgage stress; 10 of the top 20 markets with mortgage stress were located in the Golden State. San Francisco was the top market for mortgage stress, with 61.5 percent of the city’s median household income going toward the average mortgage repayment. Los Angeles and Oakland were second and third at 50 percent and 49.7 percent, respectively; the highest-ranking non-California market was New York at 47.7 percent.

The markets with the least amount of mortgage stress were typically located in the Midwest. Detroit was the market with the lowest proportion of income to repayments with 6.1 percent, followed by two Ohio cities (Toledo, 7.26 percent, and Cleveland, 8.5 percent), Memphis (8.63 percent), and Fort Wayne, Indiana (9.3 percent). 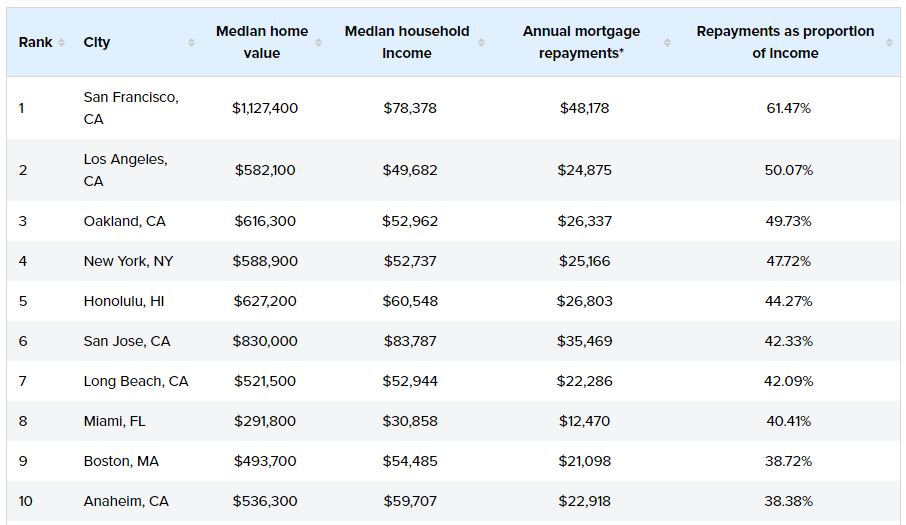