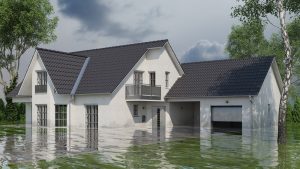 Flood insurance may be getting an overhaul, but not in the form of the National Flood Insurance Policy.

The House of Representatives on Thursday passed the Flood Insurance Market Parity and Modernization Act (H.R. 2901), which under section 2 would “amend the Flood Disaster Protection Act of 1973 to make technical amendments without substantive change to requirements for flood insurance under either the federal program or private flood insurance.” The amendment was passed by a vote of 264-155 in a bipartisan vote.

Sponsored by Rep. Dennis Ross (R-Florida) and Kathy Castor (D-Florida), the bill makes small revisions to requirements of flood insurance to home loans or homes guaranteed by Fannie Mae or Freddie Mac, and will allow for private flood insurance to enter the marketplace, so long as it does not conflict with federal or state law, or regulations to insurance. The bill also specifies that flood insurance, whether federal or private, will extend to the U.S. territories of Puerto Rico, Guam, American Samoa, the U.S. Virgin Islands, or the Northern Mariana Islands.

However, later in the day, the Senate removed the flood insurance provision when they passed the FAA reauthorization bill. John Kennedy (R-LA) and Bill Cassidy (R-LA) said they prefer to include the bill in a comprehensive flood insurance reform package.

"This would be a disservice to millions of families across the U.S., especially those families still recovering from the recent hurricanes," the senators said in a joint statement. "We need Congress to act on a long-term reauthorization of the NFIP that will provide these families with affordable insurance and peace of mind.”

Previous: Borrower Credit Risk Continues to Improve
Next: Next Post