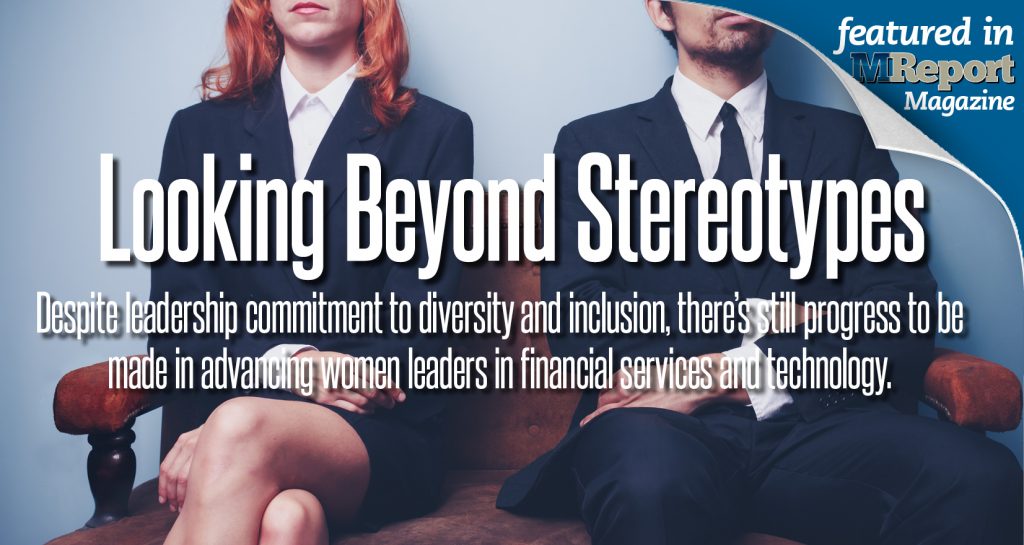 Editor’s note: This feature originally appeared in the September issue of MReport.

A report by the National Center for Women & Information Technology (NCWIT) found that 80% of women in science, engineering, and technology say they “love their work,” but 32% say “they feel stalled and are likely to quit their jobs within a year.” Given what we know today, the prism through which we are looking at women may be based on distorted perceptions, and the role of unconscious bias could partly be to blame. Unconscious bias is a preference for or against a group, person, or thing that is communicated involuntarily through statements and actions.

Unconscious bias operates under assumptions and stereotypes that we rely on as if they were facts. Our brains use stereotypes to cut corners and make decisions more quickly. For example, employers may unknowingly use gendered words in job descriptions, resulting in candidates opting in or out of the candidate pool. Gender stereotypes in STEM appear as early as second grade, and some studies have shown this to be associated with low expectations for girls in math and computing. The negative perceptions about their abilities can be reinforced by peers, parents, and teachers and can affect girls’ interest and aspirations in STEM. The results of these negative messages, while unintentional, continue through high school, where only 28% of all AP Computer Science test-takers are female.

More Work to be Done

This year, the National Science Foundation released an eye-opening report indicating that women have reached parity with men among Science and Engineer bachelor’s degree recipients. However, women are still underrepresented in science and engineering occupations. Women make up 51% of the population, 47% of the workforce, and 41% of Science and Engineering doctorates awarded in 2017. In the cyber-discipline, for example, the Center for Cyber Safety and Education revealed that 52% of women under the age of 29 have an undergraduate degree in computer science. Fifty-one percent of women in the profession have a master’s degree or higher, compared to 45% of men. Further data reveals that there were 627,000 unfilled position in tech in 2017.

Despite leadership commitment to diversity and inclusion, there is still progress to be made in advancing women leaders in financial services and technology.

The disparities do not reflect a lack of commitment to closing gaps for women in tech nor do they reflect a lack of investment in pipeline development. In fact, it’s quite the contrary, but there is no easy fix for a dearth that was long in the making. Several tech companies have put a stake in the ground around achieving greater gender inclusion in the tech space. The most familiar names include Salesforce, Amazon, and Apple. The latter has achieved gender pay equity among men and women in similar roles, as well as for under-represented minorities who work in the same positions as white employees. Salesforce has spent $6 million to correct significant differences in gender-based pay and has publicly committed to gender-inclusive hiring, and Amazon released results of an employee study which found that women made 99.9% of men’s

earnings in equivalent positions in 2016.

The market demands that we take advantage of the innovation and leadership potential of women now and focus our attention on intentional inclusion. “When Women Thrive” a study by Mercer, suggests that if we do nothing, it will take until 2133 to reach gender parity!

A healthy appreciation for the human factor can help to turn things around. Ferret out and address areas where institutional behaviors could negatively influence outcomes for women. Work to understand the double-bind dilemma for women in leadership where

gender stereotypes play a role. For example, the stereotype for men’s leadership style is: “Men take charge; they are strong, decisive, and assertive.” The double-bind for women is that “when women take charge, they are viewed as competent but are disliked.” Actions you can take include:

Become a Diversity and Inclusion Champion!

Finally, to advocate for women does not mean that you advocate against men. The perception that diversity and inclusion measures violate fairness and justice principles is simply inaccurate. We cannot separate the value of identity diversity from cognitive diversity; context matters. If we don’t address erroneous perceptions that hold women back, we put our companies at risk and lose our ability to holistically serve our customers.

Charmaine Brown is recognized as a diversity and inclusion thought leader, innovator, and advocate. Named “A Leading Lady in Housing” by MReport in 2016 and Diversity Journal’s Woman Worth Watching 2018. Charmaine holds D&I certificates from Cornell’s ILR, Harvard Kennedy School and is certified in the Intercultural Inventory Assessment (IDI). The views expressed is this article are her own.