Twice as Nice: These Homes are Gaining Value Faster

While the debate continues as to how the new president will affect housing in the United States after January, the data shows that the return on investment (ROI) for single-family houses located in Democrat-controlled districts has been double that of houses in Republican-controlled districts since President Obama took office.

According to a study released Wednesday by ATTOM Data Solutions which analyzed 2.4 million single-family homes purchased eight years ago, houses in located in districts controlled by Democrats had gained an average in value of $59,467 since they were purchased, which is a 21 percent ROI.

By comparison, houses purchased at the dawn of the Obama Administration located in Republican-controlled districts have gained an average of $22,086 in value, which represents a 10 percent ROI. 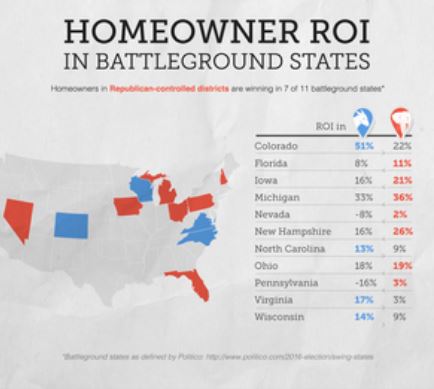 “In many of those states, but not all of them, what we see going on is they were hit hard by the housing downturn, and we see the Democrat and Republican districts more closely matched in those states—but with the Republican-controlled districts winning out by just a few percentage points,” Blomquist said. “In Florida, for example, the Democratic districts saw an 8 percent return, whereas in Republican districts it was an 11 percent return. In Michigan, it was 33 percent versus 36 percent. In Ohio, it was 18 percent versus 19 percent. We saw a lot of close calls like that, but what that tells me is that those were all states that were hit hard during the recession and everybody has struggled to come back from that hole that was dug during the recession. It's a little bit more of a level playing field in those districts with the Republican districts winning out by just a few percentage points.”