Homeownership Rate Claws Back Up, But Wait . . .

On the surface, the fact that the U.S. homeownership rate in the third quarter increased by 60 basis points from its historic low in the second quarter would seem to be good news, but headwinds in the market are still keeping the rate down.

Q3’s homeownership rate was reported at 63.5 percent, according to Census Bureau’s Q3 2016 Homeownership and Vacancy Survey released Thursday. This share represented an increase from 62.9 percent in Q2, which was the lowest recorded homeownership rate since the Census Bureau began tracking the data in 1965 (the highest was 69.2 in Q2 2004). Q3's increase came as welcome news for some, but the data contained in the report could potentially support arguments for all viewpoints in the housing industry: optimists, pessimists, and neutrals, according to Trulia Chief Economist Ralph McLaughlin.

“On the optimist’s side, household formation—whether it’s from new renter or new owner households—is good for both the housing market and the general economy, as some renters eventually become owners and new households drive demand for home-related goods and services,” McLaughlin said. “On the pessimist’s side, there are headwinds for those that want to own a home but can’t: prices and rents have outpaced incomes, credit standards are higher, and a high share of young households are still living with their parents. On the neutral side, the homeownership rate is not different from last year or last quarter when seasonally adjusted.”

Household formation numbers in the report were positive, up over-the-year in Q3 by 1.1 million (the over-the-year increase in Q2 was 944,000). Slightly more than half of the 1.1 million households formed since Q3 2015 (560,000) were homeowners. Q3’s homeownership rate is actually down slightly from the rate in Q3 last year, by 20 basis points. 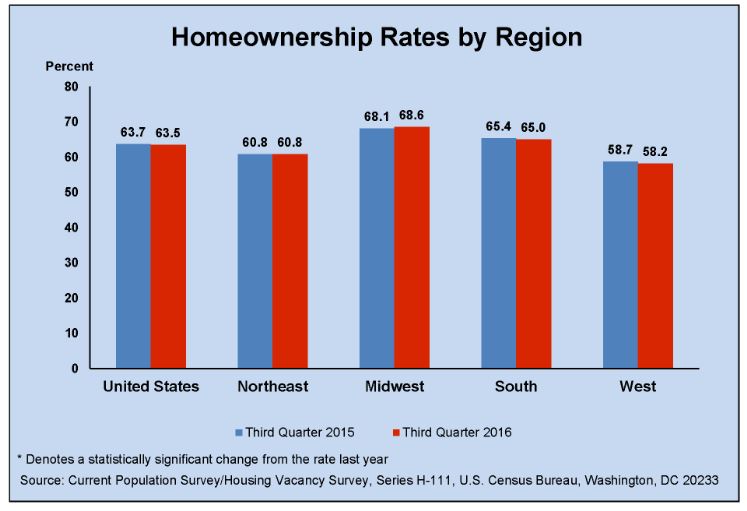 McLaughlin said he tends to side with the optimists due to the increased household formation numbers, even though the market is still facing several headwinds.

“I think this is good news in light of the fact that millennials now make up the largest pool of potential new households,” McLaughlin said. “Though many are still living with their parents, they eventually will move out. First, they will rent, and as they settle down, and then they will buy. While we can’t know for sure they will own at rates of older generations, our survey work at Trulia shows 80 percent of Millennials want to own a home—the highest share of any cohort and the highest in the seven years we’ve run the survey. Last, we’re finally seeing wages start to outpace prices in many markets. While we’ll need to see perpetual gains year-after-year to offset the increases in prices and rents since 2012, it’s hope that renters will be able to save for a down payment. Given the headwinds, however, the homeownership rate is likely to get worse before it gets better.”

Inventory continues to be an issue for would-be homebuyers. Realtor.com reported that homes for sale in October are moving 2 percent more quickly than at the same time last year even though prices are near record highs (median list price of $250,000, which is 8 percent higher than last year). Realtor.com reported a sharper-than-usual decline in for-sale inventory.

“October is typically thought of as the off-season for home sales, but this year buyers are gobbling up inventory like it’s Halloween candy,” said Realtor.com Chief Economist Jonathan Smoke. “In fact, the number of homes for sale declined more in October than at any other point this summer, leaving us with 11 percent fewer active listings than a year earlier and the largest monthly inventory drop since July 2015.”