Black Knight Financial Services’ most recent Home Price Index (for August 2016) reported home price appreciation of 5.3 percent over-the-year and a median price of $266,000, up 33 percent from the market’s bottom and just 0.7 percent from a new national peak.

This data is important when it comes to the discussion surrounding the GSEs’ conforming loan limits, which determine the maximum size of a mortgage that Fannie Mae and Freddie Mac can guarantee, according to Black Knight Data & Analytics EVP Ben Graboske in Black Knight’s September 2016 Mortgage Monitor. Aside from 234 “high cost” counties so designated by the Federal Housing Finance Agency (FHFA), the GSEs’ regulator, the national conforming loan limit has remained at $417,000 for the last 10 years. The Housing and Economic Recovery Act of 2008 mandated that the “baseline loan limit cannot rise again until home prices return to pre-decline levels,” according to the FHFA.

With home prices less than a percentage point off of a new national peak and home values having reached pre-crisis levels by multiple measures, the FHFA can now consider raising the conforming loan limit for Fannie Mae and Freddie Mac, Graboske said.

If the FHFA does raise the GSEs’ conforming loan limit level up from $417,000, what effect will it have on mortgage originations?

“Our analysis shows that there are approximately 17 times as many originations—roughly 100,000 in total over the past 12 months—right at the conforming limit compared to preceding dollar amount buckets, and that originations drop off by about 70 percent immediately above the limit,” Graboske said. “In addition, the data shows that a GSE loan originated right at the conforming limit is nine times more likely to carry a second lien than one that is not. One example scenario shows that, with all else being equal, raising the conforming loan limit by $10,000 could result in a one percent increase in originations—approximately 40,000 new loans and $20 billion in new loan balances.” 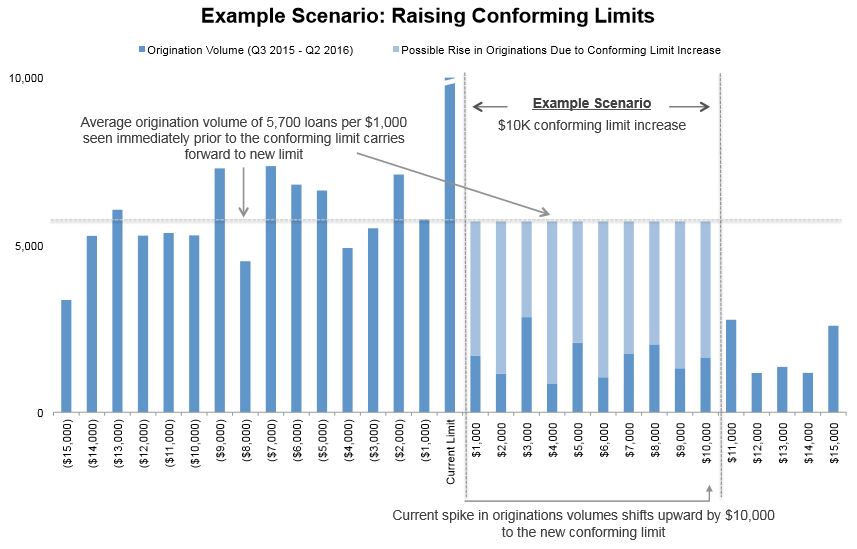