The Federal Housing Administration (FHA)’s Mutual Mortgage Insurance (MMI) fund, which has been a source of controversy in the housing industry over the last two years, is more than 30 basis points higher than the minimum required by Congress after expanding by $3.8 billion in Fiscal Year 2016, according to an independent actuarial analysis released on Tuesday.

FHA’s 2016 Annual Report to Congress revealed that this was the second consecutive year that the MMI fund’s capital ratio was reported to be above the 2 percent threshold required by Congress after increasing by 12 percent in FY2016 up to 2.32 percent.

“FHA’s strong, sustained progress has helped fuel the housing market recovery over the past eight years,” said HUD Secretary Julián Castro. “Today’s report once again confirms that our steps to maintain a financially sound fund are paying off, giving more American families the opportunity to afford a home of their own.”

“FHA has come a long way since our housing crisis,” said Ed Golding, HUD’s Principal Deputy Assistant Secretary for Housing.  “With evidence that FHA’s fundamentals are strong and improving, there is no doubt that FHA is making steady progress accumulating capital and, at the same time, improving access to credit for working families.”

The FHA’s Single Family Forward Portfolio outperformed the actuary’s projections by $10.1 billion with a gain of $18.3 billion in value in FY2016. At the end of the fiscal year, the portfolio’s capital ratio was 3.28 percent.

The Single Family Forward Portfolio gained $18.3 billion in value, outperforming the actuary’s projections by $10.1 billion and achieved a capital ratio of 3.28 percent.

Following the crisis in 2008, the MMI fund experienced several years below the Congressionally-required minimum of 2 percent. In November 2014, the capital ratio’s level was at 0.41 percent; with the capital ratio less than a quarter of the threshold set by Congress, the FHA generated considerable controversy two months later when it announced the lowering of the MMI fund premium by 50 basis points down to 0.85 percent. Republican lawmakers accused the FHA of cutting off a revenue stream while the capital ratio was so far below the level required by Congress.

In November 2015, FHA announced that the capital ratio had shot up from 0.41 percent the year before up to 2.07 percent. The Agency has not lowered or raised premiums since the move in January 2015, however. 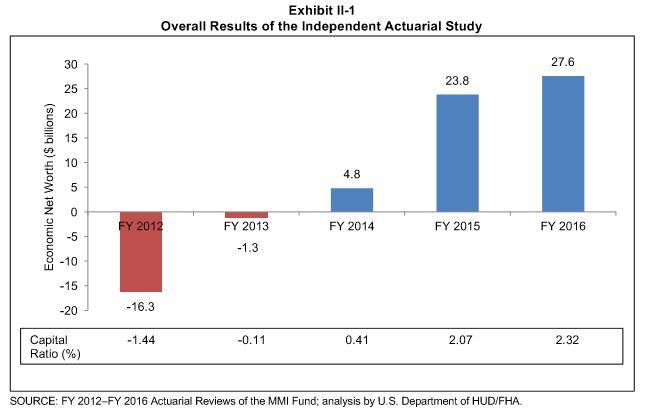 Previous: American Mortgage Diversity Council Announces Leadership Appointments
Next: What Will Happen with Affordability in 2017?