The growth of the single-family housing sector has been slow and gradual over the last few months due the steady and solid level of builder sentiment during that period, according to the National Association of Home Builders (NAHB)/Wells Fargo Housing Market Index (HMI) for November.

The HMI reported a reading of 63 in November, the third straight month it has been higher than 60 and tied for the second-highest level for any month in 2016. In September, the HMI shot up to an 11-month high of 65 from its August reading of 59 amid solid job growth, near record-low interest rates, and strong single-family housing demand.

“Builder sentiment has held well above 60 for the past three months, indicating that the single-family housing sector continues to show slow, gradual growth,” said Robert Dietz, Chief Economist with NAHB. “Ongoing job creation, rising incomes and attractive mortgage rates are supporting demand in the single-family housing sector. These factors will help keep housing on a steady, upward path in the months ahead.”

Dietz noted that the data for the November HMI was gathered prior to the election, meaning that builder sentiment remained above 60 even amid the uncertainty around the election’s results. 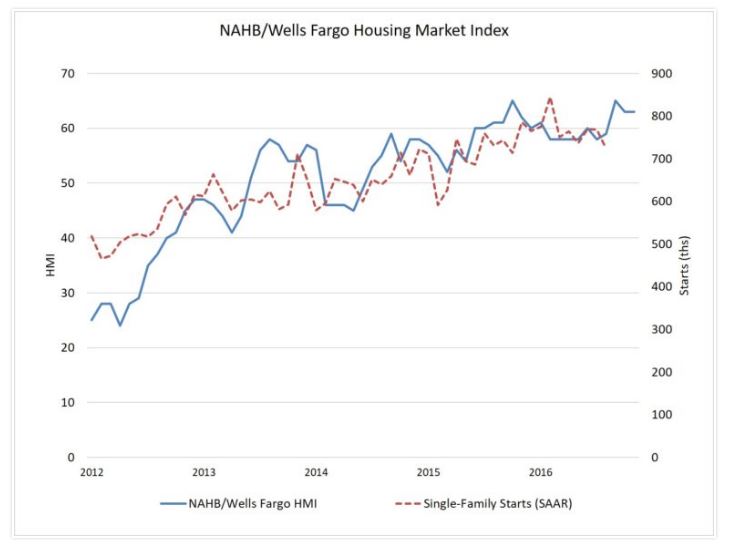 David Berson, Chief Economist with Nationwide, said that the November HMI “suggests continued strong demand from homebuyers for new housing. The survey shows that homebuilders confidence in the direction of the new home market continues to grow.”

Berson added, “Job and income gains as well as stronger household formation this year are driving demand for new construction across the country. Homebuyer traffic for new homes remains elevated with mortgage rates near record lows and the supply of existing homes on the market still tight.”

The findings of the HMI concur with those of Nationwide’s Health of Housing Markets report, which indicated a generally healthy housing market for almost all of the county’s 400 metro areas.

“There are only a few cities where the energy sector remains a drag on housing sector growth and these negative impacts are slowly receding,” Berson said.