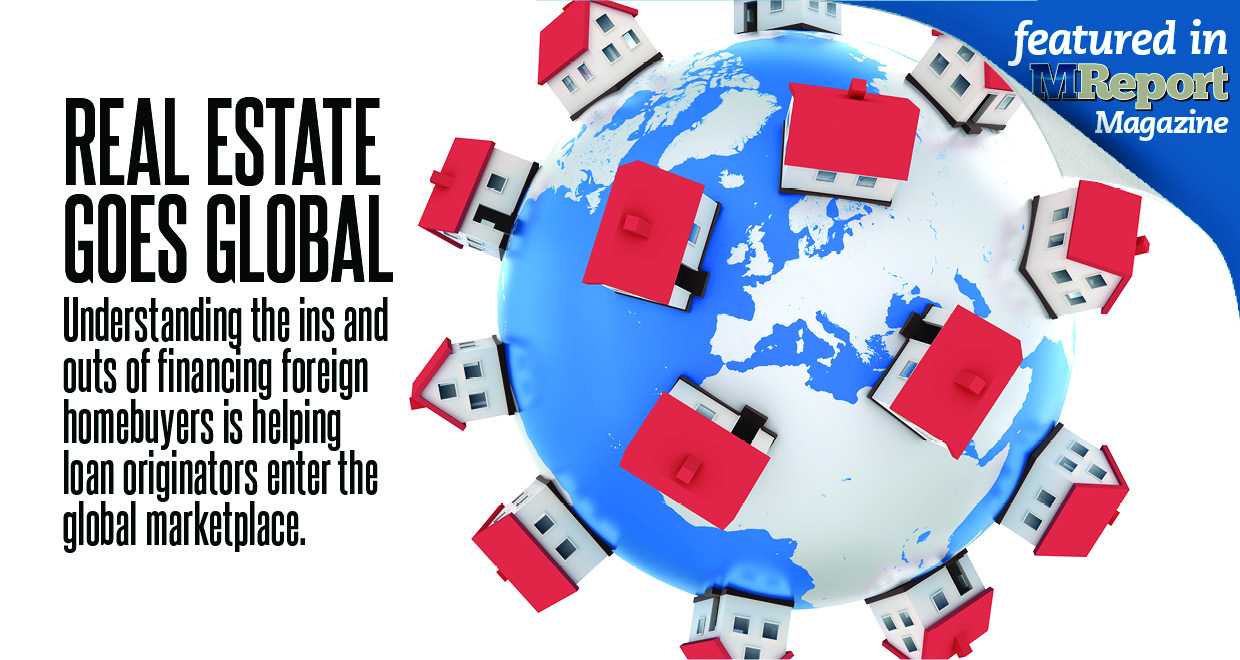 Foreign buyers of U.S. homes are a significant and important source of business to builders and lenders alike. It’s essential that savvy loan originators under- stand the scope of this market, regulation impacting foreign investment, and the options available.

In the 12-month period through March 2018, foreign nationals purchased more than 284,000 properties in the U.S., according to the National Association of Realtors. The dollar volume of these purchases was $121 billion, or about 8 percent of the entire market for existing home sales.

Though this percentage is down about 10 percent from 2017 due in part to higher home prices, a strengthening dollar, and political tensions, foreign investment remains significant to the U.S. housing market, with states such as Florida, California, and Texas particularly impacted.

Understanding the Rules and Regs

Loans secured for homes can be divided into two types: consumer loans and business-purpose loans. Consumer loans are generally loans to owner-occupants and are regulated highly by a variety of federal and state regulators. TILA-RESPA Integrated Disclosure (TRID) and a variety of other laws dictate how a mortgage-loan originator must determine the suitability of the loan for the borrower and disclosures, among other topics. In contrast, business-purpose loans are relatively lightly regu- lated. Business-purpose loans include loans to investors who are not owner-occupants.

Dennis Doss is a California-based lawyer who specializes in mortgage lending. According to Doss, “State and federal consumer protection laws apply to loans to foreigners, so don’t lower your guard.” Nema Daghbandan, another California lawyer, adds, “The Truth-in-Lending Act—or TILA—deems properties as owner-occupied if the borrower resides in the property 14 or more calendar days per year. Also, if the property is occupied by the child of the owner, for example, while that child attends school in the U.S., consumer-lending laws apply as if the owner himself or herself occupied the home.”

For owner-occupant foreign- national buyers, selected banks are open to making loans. These loans are sometimes called “non- QM” loans because they do not fit in the normal box of “qualified mortgages.” As with other non-QM loans, down-payment requirements may be larger than for U.S. citizens—with a 30 percent down payment being a typical requirement for foreign buyers. Rates will also be slightly higher, due to the limited number of lenders and in- vestors participating in this market and the perceived higher risk of default by a foreign national.

For business-purpose loans, there are two types of options available, depending on whether or not the home is rented out and generating steady cash flow. If it is rented, certain specialized lenders will provide financing at rates slightly higher than the rates for owner-occupants, as long as there is debt-service coverage in place to service the loan. In other words, the net operating income (NOI)
of the property after accounting for all expenses must be enough to cover the monthly mortgage payment, plus a small margin. A debt-service coverage ratio of 1.2 is typically required for rented residential-property loans, meaning that NOI is 120 percent of the mortgage payment.

Typically, these rental property loans have significant prepayment penalties. For example, a ve-year loan may have a 5-4-3-2-1 prepayment, with each number representing the percentage of the loan balance that must be paid as a fee to the lender, depending on the year of prepayment. In the rest year, the fee is 5 percent; in the second year, 4 percent; and so on. Some lenders charge prepayment penalties because of the work involved in financing an investor loan to ensure that the lender and originator receive a return for underwriting and funding the loan. Also, many of these loans end up being securitized, and mortgage securities typically only allow for a small percentage of loans in the security to be prepaid. The penalty discourages borrowers who aren’t sure they want to keep the loan long term and covers the costs associated with substituting a new loan into the security in case of prepayment of the first loan.

For investor loans on rented property, expect a fairly thorough underwriting process and a funding timeline of several weeks, once all due diligence has been supplied to the lender. Also, be prepared that most lenders specializing in this market prefer to make loans on portfolios of properties, rather than on a single investor-owned home. It can be challenging to get attention for an investor loan of less than $1 million, because of the specialized skills and resources required to underwrite such loans.

For borrowers requiring quicker funding and maximum flexibility, private lenders likely offer the best solution. These loans
feature higher rates than either owner-occupied loans or rental property loans. However, they can typically fund in a couple of weeks vs. months, and underwriting is usually much more streamlined. Also, borrowers need not have rental income in place at the time of requesting this type of loan. If the borrower plans to make renovations to the property, private-money loans often feature draw-based funding to finance such renovations.

Private lending has evolved a great deal since the Great Recession, and there have never been more options. Sometimes referred to as “hard-money loans,” private-money loans now feature lower rates and origination fees than in the past, when double-digit interest rates were common. Rates vary by region, but in California rates in the 7s and 8s are currently fairly common. Also, some private lenders allow higher leverage of 70-80 percent vs. leverage of 50-70 percent, which is s usual for the other loan types. While in the past private-money loans were the domain of local hard-money lenders and mortgage brokers, today there are many highly professional funds which can underwrite, fund, and service such loans.

One option for foreign buyers is to close on a property using a private-money loan, and then to refinance into a lower-cost mortgage later. While the borrower will incur slightly higher transaction fees, this also allows for the foreign investor to separate the process into two distinct phases, make improvements as needed, and get the property rented before obtaining permanent financing. Because private-money loans are often used for a year or so, they are sometimes called “bridge loans.” They act as a bridge until the borrower can obtain a lower-cost multiyear or “permanent” loan.

Michelle Mollura, Regional Branch Manager at RMP Mortgage based in Palos Verdes Estates, has noticed a few patterns with her foreign national borrower clients and their agents.

"Foreign nationals often prefer to work with an agent and/or loan advisor who is from their country of origin or who speaks their language fluently," Mollura shared.

Mollura has also noticed a pattern of foreign nationals working with banks from their home country that also have branches int he U.S. Even if these banks do not have the most competitive products or require extensive deposits, some borrowers do not know that they have options. She mentioned that some banks require 24 months' worth of mortgage payments on deposit to extend a loan.

Mollura mentioned one challenge she has seen in her experience is that a foreign national borrower will move to the U.S. and start new employment in the U.S. and then shortly thereafter apply for a home loan. This can cause a borrower to become disqualified from receiving certain products aimed at foreign nationals. Once a borrower is living and earning their income in the U.S., the lender must verify the borrower’s legal residency status and qualification since the loan is based upon the new employment which may or may not be eligible for a period. If a foreign national borrower applies for a home loan for an investment property or a second home while living abroad and earning income abroad, they can qualify based on their foreign income, foreign credit activity, and foreign bank accounts.

Finally, the U.S. Treasury has placed sanctions on certain non-U.S. individuals that include prohibiting lenders from providing them with financing. The Treasury’s Office of Foreign Assets Control operates a website where lenders can check whether a particular person is subject to these sanctions.

Experienced mortgage-loan originators also recommend doing a Google search of the potential borrower, including the borrow- er’s country of origin as part of the keyword. This may uncover relevant information such as news stories from the person’s home country.

By researching the data on how foreign homebuyers are impacting your market, as well as gaining insights from professionals who are well versed in this segment, you too can expand your business scope to this valuable customer base.

Previous: Chain Reaction: How High Home Prices Affect Us All
Next: The Week Ahead: Gauging the Housing Market

About Author: Jan B. Brzeski

Jan Brzeski is Managing Director and Chief Investment Officer of Arixa Capital, based in Los Angeles. Arixa Capital is one of California’s leading nonbank lenders, focused on bridge and renovation loans to investors and developers who purchase and redevelop residential properties in the Western U.S.