Otting Takes Charge as 31st Comptroller of the Currency 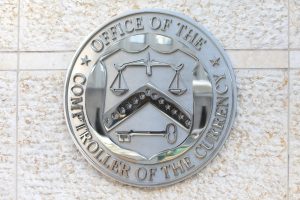 Joseph M. Otting officially became the 31st Comptroller of the Currency on Tuesday afternoon, November 27, 2017. Otting was sworn in by  Secretary of the Treasury Steven Mnuchin at the U.S. Department of the Treasury, following a successful confirmation vote by the United States Senate on November 16. That vote broke down mostly along party lines, with the final tally sitting at 54-43. President Trump nominated Otting for the role on June 5, 2017.

Otting has been a key ally of Treasury Secretary Mnuchin, previously serving as chief executive of Pasadena’s OneWest Bank, which Mnuchin founded in March 2009. Prior to that, Otting spent more than 30 years as banker, including time working for Union Bank and U.S. Bank. As Comptroller, Otting will be charged with writing overseeing new banking regulations and generally monitoring and maintaining the health of the American banking system. This will likely include working toward the administration's goals of decreasing regulation, including attempts to roll back Dodd-Frank. He will also likely continue the review of the Volcker rule—which restricts U.S. banks from certain speculative investments—initiated by his interim predecessor, Keith Noreika, who became acting Comptroller in May 2017, following the resignation of former Comptroller Thomas J. Curry.

In his official statement, Otting vowed to work to ensure that “our country has the most effective and respected banking system in the world.” Citing his own years spent as a career banker, Otting highlighted the importance of effective supervision, but added that “I also know the challenges bankers face as they work to meet customer needs while coping with unnecessary regulatory burden that makes it more difficult and complicated than necessary.”

Otting’s stated goals from the statement include “enhancing the value of national bank and federal savings association charters, reducing unnecessary burden, and promoting economic opportunity while maintaining the safety and soundness of the federal banking system.” He also emphasized a focus on “an open and inclusive process that seeks the voices of all of the stakeholders of the federal banking system.”

Previous: Mulvaney Vows CFPB Will Follow Law Without ‘Choking Off Access to Capital’
Next: Home Values Heat Up to Record Highs