To Lenders, the Future Doesn’t Look So Hot

With the first Fed rate hike in a year occurring on Wednesday and three more increases expected in 2017—and the average 30-year FRM nearly 20 basis points higher than it was at this time a year ago—lender optimism toward the market has plunged as this year ends and a new one begins, according to a survey from Fannie Mae.

The average 30-year FRM rose by another three basis points this week up to 4.16 percent, according to Freddie Mac’s Primary Mortgage Market Survey (PMMS) for the week ending December 15. For the same week last year, rates were at 3.97 percent.

The PMMS was completed prior to the Fed’s announcement on Wednesday that it would raise the federal funds target rate up to one-half to three-quarters percent, however.

"As was almost-universally expected, the FOMC closed the year with its one-and-only rate hike of 2016,” Freddie Mac Chief Economist Sean Becketti said. “The consensus of the committee points to more rate hikes in 2017. However, the experience of this year combined with the policy uncertainty that accompanies a new administration suggests a wait-and-see outlook.”

Lenders may be waiting and seeing, but at the same time, they were much less enthused about the market in Q4 than they have been for the previous three quarters. Fannie Mae’s Fourth Quarter 2016 Mortgage Lenders Sentiment Survey found that after three quarters of optimism with regard to positive profit margin, lenders’ outlook reversed course in Q4, as the outlook for profit margin fell to a survey low. Additionally, survey lows were reported across nearly all loan types for the share of lenders expecting growth over the next three months in both purchase and refinance originations.

The good news for lenders is that mortgage rates are not expected to increase much more over the next 12 months than they already have—and they are still low compared to historic levels. Redfin recently reported they do not expect rates to rise higher than 4.3 percent by the end of 2017—only 17 basis points higher than Freddie Mac’s current average 30-year FRM. By comparison, the rate reached 18 percent in 1981.

“Rates could slowly unwind in coming quarters, reversing some of the expected decline in volume,” Duncan said. “However, the potential normalization of interest rates after a sustained period of strong refinancing volumes presents the biggest business challenge facing mortgage lenders in some time.” 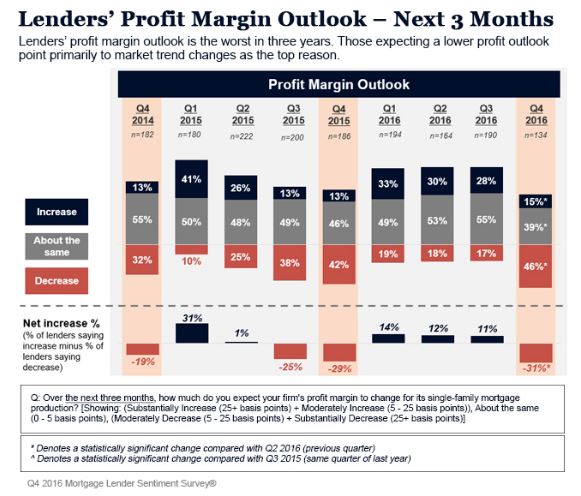