First-Time Homebuyers: The Keys to Growth 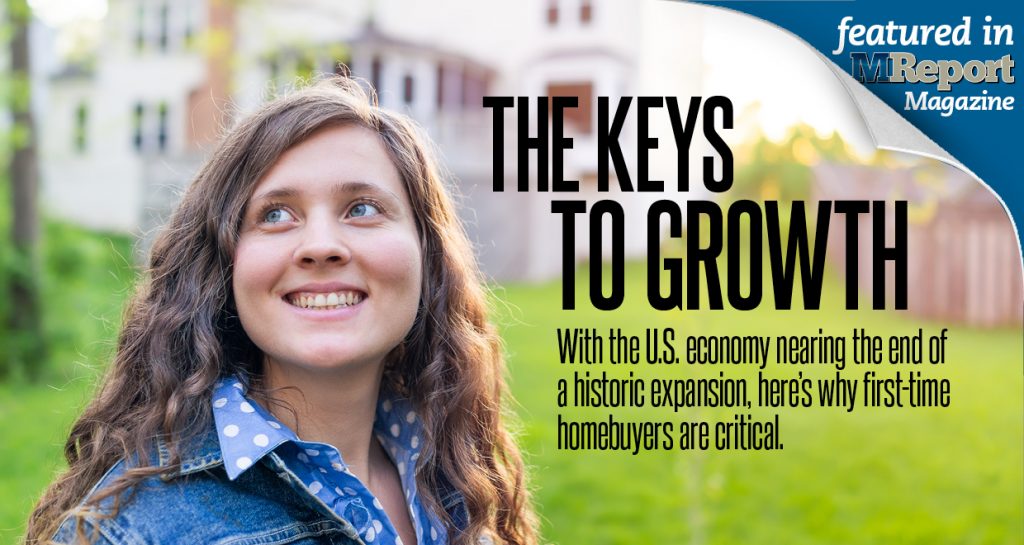 As some observers of the U.S. economy like to note, there are a variety of indicators suggesting that our nation’s long-running economic expansion could be losing steam—and sooner or later, it surely will. Planning for this eventuality is of the utmost importance for every business, but it’s also worth keeping in mind the strong place we are in currently, relative to other moments in our history.

The U.S.  is officially in its longest expansion ever, having broken our historic record of 120 straight months of economic growth over the summer. Consumer spending has been strong, while stocks flirted regularly with record highs most of the summer and into early fall. We also have the lowest unemployment rate in 50 years. In September 2019, the Labor Department informed us that unemployment, clocking in at 3.5 percent, had effectively achieved the lowest rate since 1969.

These strengths have, in turn, driven strong performance in the housing market—a cornerstone of the U.S. economy. According to the Radian Home Price Index, stronger year-over-year home price appreciation was driven by lower interest rates, lack of supply, and a solid economy. Year-over-year gains in appreciation had slowed throughout much of 2018 and the first months of 2019, but the Index tells a different story now. All indications are that low interest rates in particular have reheated an already hot real estate market.

Additionally, U.S. Census data tells us that the homeownership rate continues to steadily increase since its recent low in 2016, and reached its four-year high in 2018 at 64.8% before more recently leveling off to 64.1% in Q2. Since first-time homebuyers—most of whom are between the ages of 24 and 35—constitute about 33% of total residential home sales, their experience is integral to understanding the current state of the housing market.

For many years, millennials have been the subject of a lot of attention within the housing industry, especially as they began to reach homebuying age. During that time, the market has been well educated about how to best serve millennials, a group that now makes up fully one third of the homebuying market according to the National Association of Realtors. Millennials will remain a central force in the housing market for decades to come, but Gen Z—a group that has gotten significantly less attention thus far—is now also beginning to enter the homebuying market in force.

Born between 1995 and 2010, Gen Z will be the largest US demographic group by 2026, constituting approximately 82 million U.S. consumers. Thus far, surveys suggest that Gen Z is a highly practical, optimistic generation, focused early on avoiding the crushing student debt of their elders by saving money through gainful employment, financial gifts, or careful consideration of public versus private college and e-learning options. Whereas millennials lived the austerity of the Great Recession, for Gen Z, economic hardships are something their parents told them about and that they quietly take measures to avert. Millennials and Gen Z are looked upon as being wholly fluent in technology, but Gen Z never knew a world without it and has evolved to incorporate technology into virtually every aspect of their lives.

While starting off life with a more conservative approach to borrowing than previous generations, perhaps it is Gen Z’s inherent optimism that inspires its dream of homeownership. Indeed, a recent survey conducted by Homes.com reported that 87% of Gen Z members report they want to own their own homes before age 35, the age of the average first-time homebuyer, according to Fannie Mae.

Based on today’s positive market conditions, Gen Z’s homeownership plans seem reasonable and achievable. And yet, while record numbers of workers across generations are currently gainfully employed and consumer sentiment is strong, the dream of owning a home can still be frustratingly out of reach.

As Gen Z is wisely alert to, student loan debt remains a significant burden. Across all generations, student loan debt reached $1.7 trillion or $35,359 per capita on average in 2019. According to AARP’s Three Generations Survey conducted in late 2018, 36% of millennials say the burden of student debt has prevented them from buying a house, while 25% admit it has prevented them from moving from their current homes. For baby boomers, those figures work out to 32% and 18% respectively; for Gen X, 26% and 21%.

With 48% of Millennials, 26% of Gen X, and 12% of baby boomers burdened by student loan debt, saving for a down payment and home price affordability are paramount concerns for first-time buyers. Unfortunately, with rising land prices and localized regulatory constraints, many cities are experiencing a shortage of moderately priced starter homes. According to the Harvard Joint Center for Housing Studies’ 2019 State of the Nation’s Housing, the increased costs associated with producing new homes have forced builders to focus on developing a higher-end product with better profit margins, leaving first-time homebuyers with little inventory in their price range. The study’s authors conclude with an appeal to the public, private and nonprofit sectors to help the housing market meet the diverse needs of the growing U.S. population.

Happily, all three of these segments—public, private, and nonprofit—are actively addressing ways and means to help homebuyers, in particular first-time homebuyers, achieve their dream of homeownership. While all continue to support homebuyers with tried-and-true solutions, most are also introducing more innovative tactics.  With more than a nod to millennials and Gen Z, new technologies are being introduced that are already creating efficiencies by reducing delays and simplifying processes.

In the private sector, private mortgage insurance (MI) makes it possible for borrowers to access the conventional mortgage market and get into a home of their own without waiting years to pay off debt while saving for a 20% down payment. Indeed, thanks to MI, the median down payment among first-time buyers has been just 6 percent since 2014. More broadly, MI has benefited the overall housing market by insuring tax payers and the federal government against mortgage defaults.

Helping to educate homebuyers about these many options are licensed real estate agents, themselves served by not for profit advocacy and policy groups such as the Asian Real Estate Association of America and the National Association of Hispanic Real Estate Professionals, whose missions are to foster sustainable homeownership in their communities through educational tools and meaningful public advocacy support.

Increasingly supporting the activities and missions of all three segments so critical to the homebuying market is financial technology. Fintech is anticipated to change the way households buy and sell homes, obtain and manage mortgage debt, and monetize housing wealth. Many segments of the homebuying market have quickly adopted fintech into their own services, and with its many appeals, continue to seek new innovations.

Private sector activity in the mortgage lending phase has multiplied, with service providers focused on accelerating the mortgage lending process with technology facilitating the process from loan application to approval to closing. A recent study conducted by the New York Federal Reserve Bank showed that fintech lenders are processing mortgage applications approximately 20% faster than traditional lenders, at no cost of greater defaults. The study concluded that in areas of more fintech lending, “technological innovation has improved the efficiency of financial intermediation in the U.S. mortgage market.”

Technology has also created efficiencies through automation by enhancing the data verification process and creating analytics-driven metrics for loan officers to more rapidly understand their borrower’s finances. In many cases, title and closing procedures have also been digitized, erasing hours of paperwork in the process.

Although fintech in the housing market is only in its nascent days, process simplification and automation are already improving at lightning speed thanks to continuous innovation. While millennial habits are credited with the rapid adoption of fintech in the housing market, it will surely be Generation Z that drives its expansion and innovation in the digital mortgage space.

The new generation of homebuyers is diverse, better educated, and savvier than ever before, they have experienced the confluence of technology, automation and increased personalized contact and demand the same from the housing industry.

As we survey the current state of the housing industry and look towards the future, all members of the housing ecosystem must continue to facilitate responsible and sustainable homeownership. While sentiments are positive and statistics are favorable for continued growth, in order to meet the demands of an emerging first-time homebuyer population the housing industry will need to embrace technology on both the front and back ends, thoughtfully monitor economic progress and remain cognizant of the nuances facing each generation.

2019-11-29
Mike Albanese
Previous: The Importance of Digitizing the Mortgage Experience
Next: Refinancing’s Impact on Mortgage Market