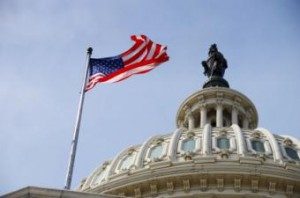 The Trump administration has come up with some initial economic projections that forecast a rosy future for the country, but a number of economists and observers are questioning what they’ve seen from reports thus far.

According to a story by the Wall Street Journal’'s Nick Timiraos, who reportedly spoke on background with several sources, the new administration put together projections that showed U.S. gross domestic product reaching between 3 percent and 3.5 percent annually.

The Journal reported that administration officials have done away with any formal budgetary process in producing these forecasts, and instead plugged in numbers consistent with their goals.

“What’s unusual about the administration’s forecasts isn’t just their relative optimism but also the process by which they were derived,” Vox reported Timiraos writing.

According to CNBC, President Donald Trump has vowed to increase economic growth in the United States to that magic number over the next decade.

"My great economists don't want me to say this, but I think we can do better than that," the news outlet reported President Trump telling the Economic Club of New York in a speech last year.

For comparison, the U.S. economy has averaged about 2 percent each year since around the time of the financial crisis, according to the Journal.

Though some are in favor of President Trump's economic forecasts, critics from independent outlets and organizations were quick to note that the forecasts clash with more reliable and nonpartisan reports.

According to the Journal, these included much-less-rosier forecasts published by the Congressional Budget Office and Federal Reserve, both of which project less than 2 percent in GDP growth over the same time in question.

Writing for the New York Times, Paul Krugman, a professor of economics, voiced his opinion by stating the reports as “economic arrogance” in an op-ed published Monday.

“There is, as far as we can tell, no serious analysis behind this optimism,” Krugman wrote.

The WSJ reported that administration officials have since revised their internal forecasts.