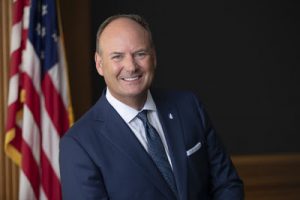 John Carter has been named as the President and COO-elect of Nationwide's financial services business lines, effective immediately.

"John brings more than 30 years of financial services industry experience to this role," Walker said. "Throughout his career, he has demonstrated outstanding leadership, both in terms of results and people. John is a strong advocate for the retirement security of America's workers—helping them prepare for and live in retirement. We look forward to achieving continued success under his guidance."

Carter joined the Ohio-based Nationwide Financial in 2005 as president of the Nationwide Financial Sales and Distribution organization, responsible for leading sales of private-sector retirement plans, life insurance, annuities and mutual funds. In 2013, he was named President of Nationwide's retirement plans business.  In his current role, he and his team have introduced innovative retirement solutions, driven profitable growth and delivered a member and partner experience that has been recognized nationally by organizations including J.D. Power and Dalbar.

"I'm confident in Nationwide's future and the opportunity to build on our strength of promoting and protecting retirement for America's workers," Carter said. "As a leading provider of individual and workplace solutions, I see tremendous growth potential for this business by focusing on how our customers want to be served."

Prior to joining Nationwide, he held executive positions in financial services at Prudential Financial, UBS and the former Kidder Peabody.

"Nationwide benefits from a strong bench of executive leaders," said retiring CEO Steve Rasmussen. "Kirt and John will work together to facilitate a smooth transition and maintain the strong growth momentum we've built over the past several years. We look forward to achieving continued success under John's leadership, building on Nationwide's mutual heritage, financial strength and culture of caring."

Carter is a graduate of the University of Missouri where he earned a Bachelor of Science degree in Business Administration and Finance.