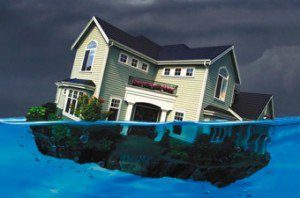 According to ATTOM Data Solutions’ Year-end 2016 U.S. Home Equity & Underwater Report, 5.4 million U.S. homes deemed seriously underwater at the close of 2016, accounting for 9.6 percent of all mortgaged properties in the nation. Seriously underwater homes, which means the combined loan amount on the property was 25 percent, or more, higher than the home’s market value, were down from 10.8 percent at the end of Q3 2016 and 11.5 percent year-over-year.

“Since home prices bottomed out nationwide in the first quarter of 2012, the number of seriously underwater U.S. homeowners has decreased by about 7.1 million, an average decrease of about 1.4 million each year,” said Daren Blomquist, SVP of ATTOM Data Solutions. “Meanwhile, the number of equity-rich homeowners has increased by nearly 4.8 million over the past three years, a rate of about 1.6 million each year.”

The highest share of seriously underwater homes was found in Nevada, Illinois, Ohio, Missouri, and Louisiana. At the end of 2016, nearly 20 percent of all mortgage properties in Nevada were seriously underwater. As for individual metro areas, Las Vegas; Cleveland; Akron, Ohio; Dayton, Ohio; and Toledo, Ohio took the top spots.

In Ohio, the large number of underwater properties is causing an inventory problem, according to Matthew L. Watercutter, Senior Regional Vice President and Broker of Record for HER Realtors, which serves the Dayton, Columbus, and Cincinnati markets.

“One of the primary reasons we have a shortage of inventory is due to the high number of homeowners who are still underwater, making it difficult to sell and move as they would need to conduct a short sale or bring money to the closing,” Watercutter said. “A high percentage of those homeowners are waiting it out until they are no longer underwater or in a better position to sell, contributing to the shortage of inventory. I expect this dynamic to continue through 2017.”

On the other end of the spectrum, properties that are equity-rich—meaning the loan amount was 50 percent or less than the home’s market value—have risen. At the end of 2016, there were 13.9 million equity-rich properties, accounting for 24.6 of all properties. This marks a jump from 22.5 percent in 2015—and 1.3 million homes.

“Despite this upward trend over the past five years, the massive loss of home equity during the housing crisis forced many homeowners to stay in their homes longer before selling, effectively disrupting the historical domino effect of move-up buyers that feeds both demand for new homes and supply of inventory for first-time homebuyers,” Blomquist said. “Between 2000 and 2008, our data shows the average homeownership tenure nationwide was 4.26 years, but that average tenure has been trending steadily higher since 2009, reaching a new record high of 7.88 years for homeowners who sold in 2016.”

The highest share of equity-rich properties was found in Hawaii, Vermont, and California. San Jose, California; San Francisco; Honolulu; Los Angeles; and Pittsburgh, Pennsylvania were the most equity-rich metros.