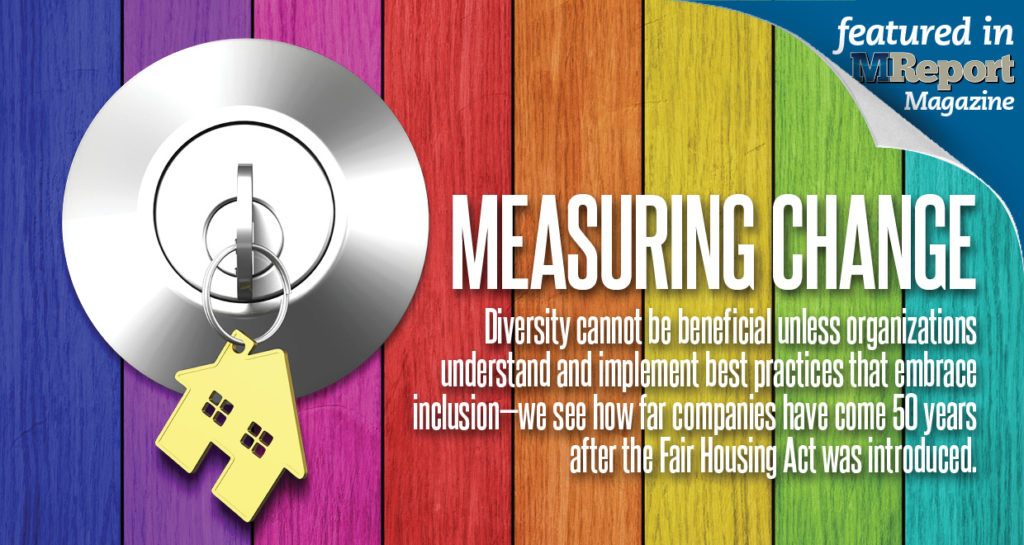 Editor's Note: This is a special sneak preview of the June issue of MReport.
The full issue will be available on June 1.

This year marks the 50th anniversary of the introduction of the Fair Housing Act, which promotes equal housing opportunities regardless of race, color, gender, familial status, or religion. The act also protects property activities such as sale, rental, and financing of real estate from discrimination. From a mindset of merely complying with this act in 1968 to making diversity and inclusion (D&I) initiatives for equal housing a part of their business strategy, the industry has come a long way from when this act was first introduced.

The business case for D&I becomes especially important in today’s housing market as the homebuying population continues to become more multicultural, span new generations, and break down barriers across gender lines. Today, the industry faces a new set of questions such as what can be done to create a more inclusive workforce, one that not only includes individuals from diverse backgrounds, but also gives a competitive edge in the marketplace. Most importantly, the industry is trying to answer the question of moving beyond the organization to unlock the true value of D&I.

View from the Top

The accountability to encourage the participation of a diverse workforce begins at the top, and the top management of many banks has stepped up to the plate, actively taking part in and guiding D&I as the overall business strategy in America and beyond.

In June 2017, 175 CEOs from leading global companies signed a pledge that started a new CEO-led alliance called the CEO Action for Diversity & Inclusion that focuses on creating an equal workplace for all.

Today, that movement has grown to include 400 leaders, with many of the signatories including CEOs of some of the biggest banks and financial institutions. These signatories have pledged to three core commitments: continue to cultivate workplaces that support open dialogue on complex, and sometimes difficult, conversations about D&I; implement and expand unconscious bias education; and share best known—and unsuccessful—actions. To date, more than 400 actions were submitted across 19 key topic areas.

Mary Mbiya, Director of D&I at Flagstar Bank, one of the many organizations that has signed the CEO Action for Diversity & Inclusion pledge, said, “Leadership commitment is very important to D&I, and our CEO demonstrated that by signing the pledge. This set the tone from the top, which has led to tremendous engagement by our employees.”

Banks like Wells Fargo are not only members of this coalition but have also supported legislations that encourage diversity beyond the workplace. “In addition to standing against the potential deportation of an estimated 800,000 young adults in the U.S., our CEO joined other business leaders in signing an open letter that supports the Deferred Action for Childhood Arrivals (DACA) program,” shared Brad Blackwell, EVP and Head of Housing Policy & Homeownership Growth Strategies at Wells Fargo Home Lending.

To read the rest of the story, check out the June issue of MReport, available June 1.

Previous: Home Construction vs. Inventory Shortage
Next: Town Hall to Tackle Diversity in Mortgage and Housing